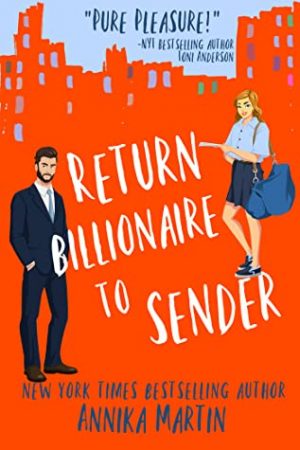 Noelle’s home is slated to come down as part of billionaire Malcolm Blackberg’s block improvement project. Although several of the residents have tried to talk to Malcolm, he won’t see anyone. So Noelle devises a plan to get into his office, show him a documentary of the residents, and convince him to change his mind. However, when she’s mistaken for his court-ordered “emotional intelligence” executive coach, she takes a risk and uses the error to get close to Malcolm.

Ms. Martin gives fans another crazy romance with lots of laughs in Return Billionaire to Sender. There is a bit of a Pretty Woman vibe with Malcolm the cold-hearted executive who sweeps in to purchase companies and break them up for profitability and Noelle attempting to change his heart. However, Noelle has an uphill battle because Malcolm knows he is the villain and likes it.

“Inspiring a person to feel empathy for those whose lives he might upend only works on somebody who cares, who wants to avoid being a villain. Me? I know what I am. I’m a bad man, Elle, and I’m perfectly comfortable with it.”

I enjoyed watching Noelle work outside her comfort zone, never giving up on Malcolm, seeing aspects of his personality that no one else could. She may come across naive, but she genuinely believes that people are inherently good and isn’t willing to give up on Malcolm, or let the residents of her building down.

Malcolm is immediately attracted to Noelle, which causes him to stop and listen to her, which then in turn causes him to become a bit obsessive over her.  I have to say, at first I found his fixation with her ties a bit creepy; however, I grew to appreciate how much he enjoys Noelle’s ideas and views on life.

But here is the thing… even though Noelle and Malcolm are “real” with one another, she holds up the charade of being his executive coach for way too long. Way. Too. Long. As the book progressed, I struggled to enjoy the story because I was so stressed out over the compounding lies. At one point, I would have graded the story a C+. However, Ms. Martin won me over with the last 10-15% of the story. No spoilers, but I completely loved how it all works out.

In the end, I enjoyed Return Billionaire to Sender. Ms. Martin creates chaotic, kind, fun-loving characters and stories filled with laughs and heart.

I may be a shy, lowly letter carrier, but when my beloved apartment building is threatened by a mysterious and reclusive billionaire, I’m willing to push the envelope. I’m going to march right up to Malcolm Blackberg’s fortress of fierceness and deliver a cease-and-desist notice he can’t refuse.

Except as soon as I get inside his gilded doors, things go sideways—I’m mistaken for Malcolm’s court-ordered emotional IQ coach, as if I’m acting out a wacky postal carrier cosplay.

They drag me in, a sacrificial lamb for the big bad. Make that big, smolderingly sexy bad.

So I make up a lesson involving a story about our building. He doesn’t seem happy. Can he tell that I have no idea what I’m doing?

Before I know it I’m flying around the country, up close and personality testing the most devilishly exasperating man I’ve ever met.

He’s scary for sure…but the way he sometimes looks at me turns my knees to jelly, and has me writing love letters to his gorgeous eyes, his mouthwatering smile, his impressive…package.

Our coaching sessions are getting hot-hot-hot, but I can’t let my guard down. If he ever finds out I’m a first-class fake, I’ll lose everything I’ve ever loved in this world!