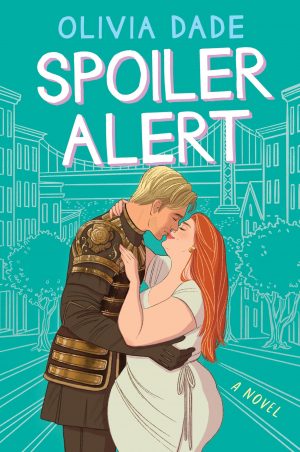 Marcus Caster-Rupp is a heartthrob and a lead actor in Gods of the Gates, a Game of Thrones fan-base type show. They’ve just concluded filming the final season and Marcus is highly disappointed because of the subpar scripts. So he gives himself an outlet, he writes Gods of the Gates fanfic under a secret identity, and if anyone found out, his Hollywood career would be over.

April Whitter is tired of hiding so much of her true self, that she loves cosplay and writing Gods of the Gates fanfic. She knows reputation is everything in her current field, so she’s never shown anyone her real-self. But now she’s got a new job and is slowly letting her in-person and online worlds merge, including letting her online friends her what she looks like.

When April takes a personal risk and posts a cosplay photo of herself on Twitter, one that reveals her larger size, several a-holes retweet it and call her names, tagging Marcus in the process. He stands up for her, calling her beautiful, and asks her out on a date to show those jerks he means what he says. Little does either know that the other is secretly their online, fanfic writing best friend.

Marcus and April are such a wonderful breath of fresh air. Both smart and talented, and each learning how to reveal their true selves to the world. April is confident and able to brush off the whispers and hurtful behavior of strangers, but takes a chance to open up to Marcus and her new coworkers. She’s also learning how to stand up for herself with her parents. She is blossoming as she allows all pieces of herself to merge.

Marcus is similar in many ways, but he hides his true self behind a public persona, wrapping it around himself like a shield. Around April, however, he can’t help opening up, which creates small cracks in his armor. He realizes quickly he’s head over heals and lets her in, yet he hides the one secret that he knows will end things.

I just love Olivia Dade’s storytelling. I love her characters – they have flaws, but are willing to admit when they are wrong – willing to stand up for what they believe in – willing to work on the hard parts. They make mistakes and move past them, growing stronger. And this is why Marcus and April work so well. Watching them accidentally hurt one other brakes my heart, but seeing how they deal with mistakes in such a mature manner brings me utter joy.

Marcus Caster-Rupp has a secret. While the world knows him as Aeneas, the star of the biggest show on TV, Gods of the Gates, he’s known to fanfiction readers as Book!AeneasWouldNever, an anonymous and popular poster.  Marcus is able to get out his own frustrations with his character through his stories, especially the ones that feature the internet’s favorite couple to ship, Aeneas and Lavinia. But if anyone ever found out about his online persona, he’d be fired. Immediately.

April Whittier has secrets of her own. A hardcore Lavinia fan, she’s hidden her fanfiction and cosplay hobby from her “real life” for years—but not anymore. When she decides to post her latest Lavinia creation on Twitter, her photo goes viral. Trolls and supporters alike are commenting on her plus-size take, but when Marcus, one half of her OTP, sees her pic and asks her out on a date to spite her critics, she realizes life is really stranger than fanfiction.

Even though their first date is a disaster, Marcus quickly realizes that he wants much more from April than a one-time publicity stunt. And when he discovers she’s actually Unapologetic Lavinia Stan, his closest fandom friend, he has one more huge secret to hide from her.

With love and Marcus’s career on the line, can the two of them stop hiding once and for all, or will a match made in fandom end up prematurely cancelled?