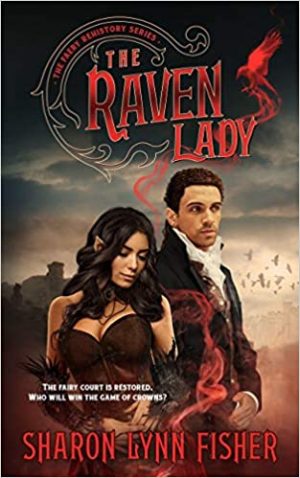 In describing the series, Fisher says, “The Faery Rehistory weaves Ireland’s ancient mythological races with Victorian-era technology and manners into an Ireland that was never conquered by the British.” So imagine an alternative world where the fairies of Ireland’s folklore are real, but closed off from the Ireland inhabited by humans. They’re in a different dimension, but inhabiting the same spaces. After the battle of Ben Bulben in The Absinthe Earl, the barrier between those worlds is taken down and they must all learn to live with each other along with coping with changes in landscape and structures.

Finvara aka Duncan O’Malley is the fourth son of the Earl of Mayo and cousin of Queen Isolde, queen of the Irish humans. Duncan is appointed by Queen Isolde as the Faery King.  We were introduced to him in the first book and got a taste of his playful nature, but he’s out of his league as Faery King. He needs help and doesn’t know who to trust. His instincts lead him to trust Koli and that trust is tested to the Nth degree.

Koli is daughter of the Elven King from the north. She was supposed to have been betrothed to Finvara by a peace agreement between Queen Isolde and the Elf King, but the shadow elves of the north are reputed to be gnarly goblins and Finvara was having none of it. So she is sent instead as an official envoy, basically a prisoner so as to limit her ability to spy for her father. I was impressed that Fisher included this. It’s a little-known fact, at least in the United States, that Ireland was actually invaded by Nordic warriors early in its history over a period of about 200 years. I only learned this fact when my husband’s Ancestry DNA kit came back almost to the village in Ireland because of specific Viking markers.  He likes to tell me he has proof now that he’s basically Thor which means he’s Christ Hemsworth. That’s total logic, right?  He’s not even blonde. I digress… Ancient records record Viking invaders that were light and later “heathen” warriors which we dark. Historians don’t know if that referred to their skin, their hair, weapons, or armor. Koli is described as having raven black hair and has a flock of ravens that protect her, perhaps the impetus for the book’s title. I liked Koli very much. She’s been subject to abuse, been a pawn in other people’s plans, and still she makes the best of every situation she’s been in—always thinking for herself. She’s fierce and never goes down without a fight in a story where no one is as they seem.

There is a steampunk flare to the story. I have not read a great deal of steampunk literature. What I have read I felt was clever, but in its own sub-genre of fantasy where the rules of the alternate universe are known. Fisher has taken what I know of that sub-genre and did something completely new with it.  Rather than industrialization simply developing that way, in The Raven Lady it is overlaid with faery and druid magic—there’s a reason for it being the way that it is. In Fisher’s fantasy, things that shouldn’t make sense suddenly do.

My one criticism is that even though we get a tidy bow that wraps up the story, it felt just a little abrupt. I flipped the page and was startled that it was the end. I can deal with that if book three, The Warrior Poet, is forthcoming soon! Right now its release is TBA.

Elven princess Koli, affronted by the king’s rejection–along with his decision to bring her to court as little more than a captive–vows vengeance. Shortly after her arrival, she uncovers a plot that would bring swift satisfaction. A dark and powerful fairy lord, Far Dorocha, wants to take Finvara’s crown and lead both the fairy and elven people to war against the Irish. And he wants Koli to help him.

It’s the perfect setup for revenge, but Koli soon discovers that Finvara’s not the haughty lord she believed him to be. And as she navigates treacherous waters inside the court, she gets glimpses of the magic and passion that have been slumbering inside her. She must choose a side in the new battle for Ireland–will it be the fearsome father she has served for nearly a century, or the fairy king who has helped awaken her to herself?