Audiobook review: A Sense of Danger by Jennifer Estep 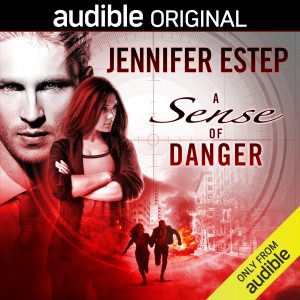 A Sense of Danger is a new, audiobook-only, standalone romance from urban fantasy author Jennifer Estep. The paranormal spy-thriller centers on Section 47, a secret government-type agency that monitors and takes out the paramoral terrorists of the world. Charlotte is an analyst whose magic allows her to see errors in spreadsheets, reports, etc. She’s been tracking a dangerous weapons maker, but her recently deceased boss kept passing her work off as his own, so now Charlotte is hoping to get some recognition for her work.

Desmond is one of the agency’s top cleaners, an assassin. His best friend and their entire team was killed on his last mission, and now he’s looking for revenge. He’s in DC, hoping Charlotte’s intelligence and abilities can help him take down those who betrayed him. The pair doesn’t always get along, but they find a way to work together.

A Sense of Danger brings together the action of a military/suspense romance and the magic of an urban fantasy, creating a wonderful blend I haven’t read in a few years. I really like Charlotte: hard working, smart, and sassy. She makes some hard choices, but does everything out of loyalty and for the betterment of the world. She’s had some tough breaks in her life, but she doesn’t let it get her down.

Desmond is suave and confident, but he isn’t quite sure Charlotte will help him. Yet with the truth, he is able to win her over. Of course, each is attracted to the other, but the book is more about the mission than falling in love. I enjoyed listening to the pair put the pieces together and make the connections necessary to succeed. I was a bit disappointed that Charlotte takes actions behind Desmond’s back, but his acceptance and trust are part of his personal growth and necessary for a relationship between the pair.

The mission is exciting, but the bad guys fell a bit flat. I pretty much guessed who was responsible for the betrayals right from the beginning, which is fine; however, once it is revealed, I felt the characters come across a bit like the bad guy cliches or a comic book villain.

Narration: The story is shared in the alternating first person POVs of Charlotte and Desmond, with Ms. Laser taking the lead on Charlotte’s POVs and Mr. Cartwright for Desmond. Overall, the story flows well and the narration is strong. Ms. Laser does a great job with Charlotte’s southern accent, and easily shifts to other dialects and accents during dialogue. She provides plenty of emotion and modulates her voice to suit a character’s gender, age, and persona. I liked her version of Desmond’s Australian accent.

On the other hand, I wasn’t wow’d by Mr. Cartwright’s performance. I will preface my comments by noting I listened to the book at 1.3x playback speed, which worked for me most of the time. However, Mr. Cartwright’s cadence was noticeably altered by the faster speed. His narration has a robotic feel like he over-annunciates every word, pausing a lot. When I slowed down the speed to 1x, his work smoothed out some and his Australian accent came through more clearly, but his words were drawn out and continued to have a clipped edge. With that said, I liked his dialogue for the other characters, especially Charlotte. He successfully alters his performance to suit her southern accent and other American-based accents.

A Sense of Danger kicks off a potential new series, but the author hasn’t committed to more books at this time. It is a standalone story, so no frets over a cliffhanger ending. I enjoyed the mix of spy-action suspense and paranormal abilities, so I for one, hope Ms. Estep writes more!

My name is Charlotte Locke, and I’m an analyst for Section 47, a secret government agency that tracks terrorists, criminals, and other paramortal bad guys who want to unleash their abilities on an unsuspecting mortal world. I have a magical form of synesthesia that senses danger and uncovers lies – making me a stealthy operative.

I’m trudging through another day when one of Section’s cleaners – assassins – takes an interest in me. I don’t need my synesthesia to realize that he is extremely dangerous and that he will do anything to achieve his goals – even if it means putting me in the line of fire.

I’m Desmond Percy, one of Section 47’s most lethal cleaners. I’m also a man on a mission, and I need Charlotte Locke’s skills to help me keep a promise, settle a score, and kill some extremely bad people.

Charlotte might not like me, but we’re stuck together until my mission is over. Still, the more time we spend together, the more I’m drawn to her. But at Section 47, you never know who you can trust – or who might want you dead.