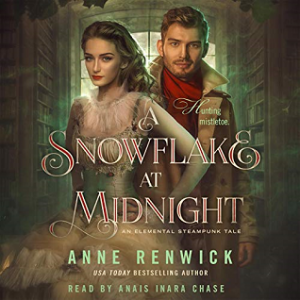 Evie is a librarian for the Lister Institute. She enjoys her job, but looks to helm her own project and take on more work. Ash is one of the botanists at Lister and is completely smitten with Evie. They’ve spent hours together working on a research proposal and now he’s ready to make Evie his bride. But when Evie’s father’s medical condition needs immediate attention, the pair give up their cozy Christmas plans to search for answers in ancient texts.

I originally read A Snowflake at Midnight a year ago, but just got around to listening this delightful, Christmas-centric audiobook. While fans of the series will recognize some familiar faces, the story is completely standalone and enjoyable for newcomers. I simply adore Ms. Renwick’s Elemental Steampunk world, filled with interesting inventions, intelligent and driven females, kind and caring men, high adventures, and sexy romance. I hope she’ll have more stories to share in the future!

Evie and Ash are established friends before the book starts, which helps in the relationship building. They flirt in the stacks of the Lister Institute library, avoiding Evie’s stern boss and an annoying, blowhard scientist who vies for Evie’s hand. There is death, a race against time, and a mechanized attack squirrel.

Narration: A Snowflake at Midnight is primarily shared in the alternating POVs of Evie and Ash. Ms. Chase presents a British accented female narrator for both the male and female parts, with dialogue altered slightly to fit the age, gender, and station of the speaker. The primary two characters’ voices aren’t very distinct from the narrator, but a mild attempt to differentiate is noticeable. My favorite standout is her performance of Evie’s boss, really capturing his contempt and snootiness. Overall, Ms. Chase has a pleasing voice; she adds appropriate pauses and provides loose emotional cues; however, I prefer a bit more of a distinction between characters.

A Snowflake at Midnight is a joy to read and/or listen to, and it is perfect for the upcoming holiday season. Grab a cup of tea or a mug of cocoa and sit down with this entertaining romance.

My Ratings
Story: B
Narration: B-

A rare manuscript. A midnight promise. A man who would steal them both away.

Pressured by looming deadlines and an annoying patron, Evie Brown, academic librarian, struggles to find joy this Christmas holiday. Worse, her sick father is ready to abandon treatments and surrender to fate — a decision she refuses to accept. Delving into a medieval manuscript, she searches for answers in the distant past.

For the woman who has stolen his heart, only a perfect proposal will do. Ash Lockwood, botanist, has transformed the rooftop greenhouse into a tropical fairyland. But when Evie begs him to help her harvest mistletoe at midnight, they venture down a different garden path – unaware that danger circles close.

When their plans implode and a murderer threatens their lives, only invention and teamwork will save them.