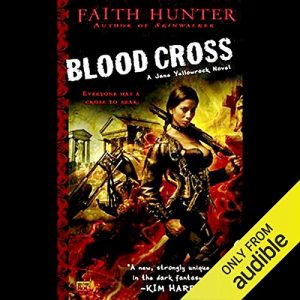 Beginning shortly after the conclusion of Skinwalker, Jane finds herself working for the Vampire Council of New Orleans (NOLA), trying to track down a rogue-making vampire. Her best friend, Molly, and her two children are staying with Jane, and she’s got the head of the NOLA vampires, Leo, after her for killing the creature he believed to be his beloved son. Things are dangerous and crazy, and I wouldn’t want it any other way!

Starting Blood Cross, I was unsure how I felt about the Jane Yellowrock series. Mostly I liked the first book, but something about it still didn’t click with me, or rubbed at me. However, after finishing the story, I was eager to begin book three. I think part of the issue is that the world is huge and even in this second book, the author continues to add and build upon both the mythology and the political structure of the vampires. There are times I was lost trying to follow the detailed history of the vampires or had trouble recalling the political alignment of each character and clan. The world is detailed and full, making it both exciting and enjoyable, but also a lot to take in.

Once again, I enjoyed the base story of the adventure. Jane is solving a mystery, one that has been covered up for a while, and I enjoy watching her put the pieces together, not necessarily caring if she upsets the apple cart in the process. She pulls apart the status quo and gives readers the inside scoop as she discovers the truth behind the vampire myths and legends. The action-packed storyline is interesting, albeit a bit gruesome. I did take issue with the number of times Jane nearly dies – she’s been at this for years and now she makes mistakes that nearly cause her death several times in a short period. It felt repetitive and unnecessary after the first time.

The author seems to narrow down amount of side characters central to the story. I was disappointed that Katie is still MIA, with little explanation of how long her recovery will take. I did enjoy the complexity of Leo and seeing the different parts of his true nature. Beast was also featured a bit less, as was Jane’s heritage, although we do get some of both.

One thing that annoyed me at first was the issue of Jane’s sex life. Granted I’m a romance junkie, and Jane’s story has nothing to do with love and everything to do with scratching an itch; satisfying Beast’s need to mate. But the oscillation between Rick and Bruiser is a game and I found it annoying. Also, the constant pull of Beast to mate clouded the first half of the story. I’m not one for triangles, so I was eventually pleased with Jane’s thought process and the outcome by the end of the book.

Narration: Ms. Hvam nails Jane’s tough attitude as well as her surprisingly tender moments with Molly’s kids. She also does a great job changing it up for Beast. I feel her Cajun accents are a bit overplayed, and male voices aren’t very masculine; however, since I am now familiar with her work and the characters this second time around, I didn’t notice as much of an annoyance with her accents. Her projection of each character is solidifying in my head.

Overall, while I started off unsure about the series, I found myself fully invested in Jane’s journey by the conclusion of Blood Cross, and I look forward to seeing what adventures lie ahead.

My Ratings
Story: B/B-
Narration: B

Jane Yellowrock is back on the prowl against the children of the night. The vampire council has hired skinwalker Yellowrock to hunt and kill one of their own who has broken sacred ancient rules – but Jane quickly realizes that in a community that is thousands of years old, loyalties run deep.