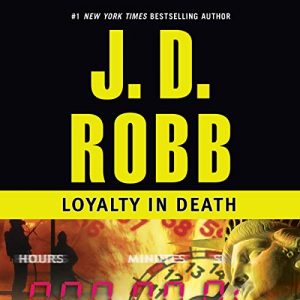 Loyalty in Death hit close to home when you take in the fact it was released roughly two years before the 9/11 attack. Eve finds herself dealing with a terrorist group called “Cassandra” who are targeting New York and government landmarks. Some attacks are eerily close to history and had me reliving news footage.

Peabody’s younger brother Zeke is in town for a job and gets a little too close to the case. Eve and Peabody step in to help him while working on their case.

Speaking of Peabody, there’s a humorous development between her and McNab. I don’t think their side story is over yet. With Eve, Roarke, Peabody, McNab, and Feeney on the case you know New York is in good hands.

Eve Dallas returns to face her most ingenious foe – a “secret admirer” who taunts her with letters…and kills without mercy. An unknown bomber is stalking New York City. He is sending Eve Dallas taunting letters promising to wreak mass terror and destruction among the “corrupt masses”. And when his cruel web of deceit and destruction threatens those she cares for most, Eve fights back. It’s her city…it’s her job…and it’s hitting too close to home. Now, in a race against a ticking clock, Eve must make the pieces fit – before the city falls.