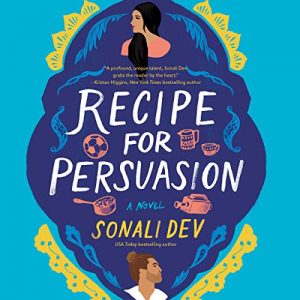 Ashna is drowning in the weight of her beloved restaurant and the legacy of her father. She cannot move past the guilt she feels over his death. To prove she is successful and loves what she’s doing to her estranged mother, she joins the cast of a reality cooking show. Yet, anytime Ashna tries to cook something other than her father’s recipes, she has a panic attack.

When a career-ending injury took Rico away from professional soccer, he wasn’t sure what he wanted next. But when the chance arises to close the door on the past and prove to himself he’s truly over his high school sweetheart, he pulls some strings to be paired with Ashna on the celebrity cooking show.

Recipe for Persuasion is a beautiful second-chance romance, chocked full of powerful emotions and multiple levels of character development. The story revolves around Shobie, Ashna’s mother who is trying to repair her relationship with her daughter, Rico, who is looking for closure and a way to move on, and Ashna who wants to save her father’s restaurant and is pretty messed up. She grew up working in her dad’s restaurant, having to take care of her alcoholic father and witness his suicide. Her mom put her career before Ashna, staying in India when Ashna and her dad moved to the United States. As a teen, she felt she had to hide her love for playing soccer and never wanted her sweetheart, Rico, to know the Raje part of her life. Ashna has a lot of unpacking to do, and Ms. Dev does such an amazing job sharing her story.

While on paper Ashna and Rico’s missteps can be dismissed as a “lack of communication,” as the story unfolds we learn of the many layers that form the truth. Ashna and Rico disagree on what happened to split them up all those years ago, but they never addressed it. Rico left the States and has no clue what happened to Ashna and her family. He comes to Ashna with the intent of moving on, with hurt and anger in his heart. As the story progresses, Rico and Ashna’s progress comes in fits and starts. They see fragility in the other and feel empathy or more. But then the walls crash down and they are cruel. Back and forth. They believe assumptions and half truths.

And then there is Shobie… you want to hate Shobie because she’s caused Ashna such pain. But there is so much to Shobie’s story. I love her relationship with her sister-in-law, Mina. They are there for one another, unconditionally. Two opposites, yet so much the same. Recipe for Persuasion is as much Shobie’s tale of reconnection to her daughter as it is a romance between Ashna and Rico.

Narration: The story is primarily shared via the third person alternating POVs of main characters Ashna and Rico, along with several passages told from Shobie’s POV. Soneela Nankani, a classically-trained actress of Indian and Ghanaian descent, performs each character fabulously. She covers a multitude of dialects and accents. She successfully portrays a wide range of ages, from the youthful niece to the elderly grandmother. Each character is unique and distinguishable from the others. She pulls off male voices that sound masculine. And she infuses so much emotion into each character, bringing them to life and making the story come alive.

In the end, I simply adored Recipe for Persuasion. There is so much going on, yet the story never overwhelms. Where as the volume the first book drew me out of the story, this time it drew me in – I wanted to know more about the three main characters. I wanted to see them heal. I love the way we “know” the big picture story at the start, and how the author then fills in the pieces, allowing the healing process.

Chef Ashna Raje desperately needs a new strategy. How else can she save her beloved restaurant and prove to her estranged, overachieving mother that she isn’t a complete screw up? When she’s asked to join the cast of Cooking with the Stars, the latest hit reality show teaming chefs with celebrities, it seems like just the leap of faith she needs to put her restaurant back on the map. She’s a chef, what’s the worst that could happen?

Being paired with a celebrity who was her first love, the man who ghosted her at the worst possible time in her life, only proves what Ashna has always believed: leaps of faith are a recipe for disaster.

FIFA winning soccer star Rico Silva isn’t too happy to be paired up with Ashna either. Losing Ashna years ago almost destroyed him. The only silver lining to this bizarre situation is that he can finally prove to Ashna that he’s definitely over her.

But when their catastrophic first meeting goes viral, social media becomes obsessed with their chemistry. The competition on the show is fierce…and so is the simmering desire between Ashna and Rico.  Every minute they spend together rekindles feelings that pull them toward their disastrous past. Will letting go again be another recipe for heartbreak—or a recipe for persuasion…?

Reviews in the Series:
The Runaway Bride by Sonali Dev (Once Upon a Wedding Anthology) (Rajes prequel)
Pride, Prejudice, and Other Flavors by Sonali Dev (Rajes #1) – Audiobook Review