Under A Winter Sky Anthology

Five powerhouse authors of fantasy and urban fantasy bring you a feast of romantic midwinter holiday adventures. These heartwarming and pulse-pounding tales celebrate Hanukah, Christmas, the solstice, Yule – and holidays from worlds beyond our own. With fancy-dress balls, faery bargains, time travel, blood sacrifice, and festive cocktails, these stories will delight lovers of fantasy and romance, with a dash of seasonal joy. 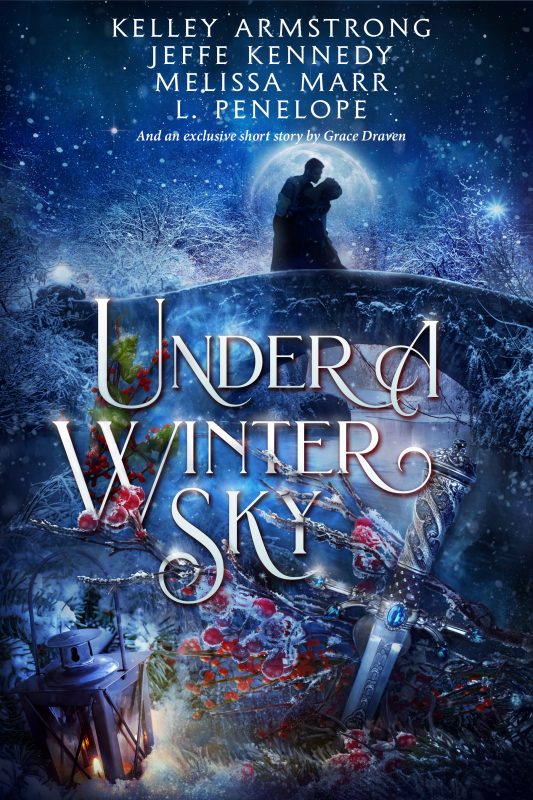 The North Yorkshire moors are always a magical place, but they’re particularly enchanting at the holidays…especially if one gets to travel back in time to a Victorian Christmas. For Bronwyn Dale, it is the stuff of dreams. Fancy-dress balls, quirky small-town traditions, even that classic one-horse open sleigh, complete with jingle bells. There’s just the tiny problem of the Butterfly Effect. How does a time-traveler make a difference without disrupting the future forever?

The Long Night of the Crystalline Moon, a prequel novella to Heirs of Magic, by Jeffe Kennedy

Shapeshifter Prince Rhyian doesn’t especially want to spend the Feast of Moranu at Castle Ordnung. First of all, it’s literally freezing there, an uncomfortable change from the tropical paradise of his home. Secondly, it’s a mossback castle which means thick walls and too many rules. Thirdly, his childhood playmate and current nemesis, Lena, will be there. Not exactly a cause for celebration.

Princess Salena Nakoa KauPo nearly wriggled out of traveling to Ordnung with her parents, but her mother put her foot down declaring that, since everyone who ever mattered to her was going to be there to celebrate the 25th year of High Queen Ursula’s reign, Lena can suffer through a feast and a ball for one night. Of course, “everyone” includes the sons and daughters of her parents’ friends, and it also means that Rhyian, insufferable Prince of the Tala, will attend.

But on this special anniversary year, Moranu’s sacred feast falls on the long night of the crystalline moon—and Rhy and Lena discover there’s more than a bit of magic in the air.

Half-dead witch Geneviève Crowe makes her living beheading the dead–and spends her free time trying not to get too attached to her business partner,  Eli Stonecroft, a faery in self-imposed exile in New Orleans. With a killer at her throat and a blood martini in her hand, Gen accepts what seems like a straight-forward faery bargain, but soon realizes that if she can’t figure out a way out of this faery bargain, she’ll be planning a wedding after the holidays.

Brought to live among the Cavefolk as an infant, Mooriah has long sought to secure her place in the clan and lose her outsider status. She’s a powerful blood mage, and when the chieftain’s son asks for help securing the safety of the clan, she agrees. But though she’s long been drawn to the warrior, any relationship between the two is forbidden. The arrival of a mysterious stranger with a tempting offer tests her loyalties, and when betrayal looms, will Mooriah’s secrets and hidden power put the future she’s dreamed of—and her adopted home—in jeopardy

A Memory of Summer by Grace Draven

Spinsterhood has never bothered or embarrassed the independent Emerence Ipsan, and the winter festival of Delyalda keeps her far too busy managing her father’s shops to worry about matters as trivial as marriage.

Until the arrival of a young Quereci warrior with old eyes and an admiring gaze makes her question that notion.

A MEMORY OF SUMMER is a short novella that takes place in the world of the Wraith Kings series. For those who’ve read the first three books in the series (RADIANCE, EIDOLON, THE IPPOS KING), this storyline takes place after EIDOLON and before THE IPPOS KING. It runs concurrently with events in the novella IN THE DARKEST MIDNIGHT and reintroduces the Wraith king Gaeres.

The Long Night of the Crystalline Moon – Jeffe Kennedy

Castle Ordnung came into view as the dragon dropped beneath the thick cloud cover. From Rhyian’s perspective on dragonback, the white towers and high walls looked only slightly less white than the snowy landscape. The high queen’s crimson banner flapped furiously on the heights, all the pennants of the subsidiary thirteen kingdoms arranged below. Though it was still afternoon, the thick snowfall dimmed the light to a grim gray, so gloomy the thousands of burning torches lining the parapets shone clearly.

Rhy snorted to himself. So much for mossback’s much-anticipated viewing of the crystalline full moon. With that overcast, no one would even see it. To think that he could be at home in tropical Annfwn, celebrating the Feast of Moranu in the traditional way—on the beach, shapeshifting, dancing, and drinking in the warm night. 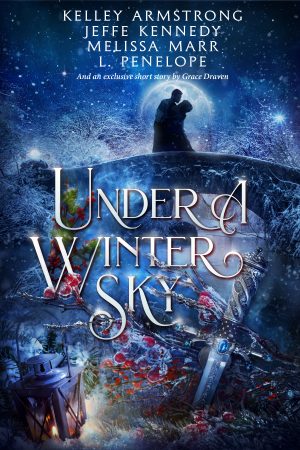 But no. His mother had issued a royal command that Rhy absolutely would attend the ball celebrating the quarter-century anniversary of High Queen Ursula’s prosperous reign. Nothing less could’ve forced him to attend. Not that Rhy didn’t love and respect his Auntie Essla. But it seemed likely Salena would also attend. And he’d rather be anywhere than in the same place as Salena.

Not something he could or would confess to anyone. And even the queen’s son must obey royal commands—particularly when his father, the king of Annfwn, did nothing to save him. So there Rhy was, tricked out in the fancy dress outfit his mother had forced him to wear via yet another royal command—the silver-trimmed black velvet making him look like a mossback—plunging into bitter winter, and counting the minutes until the following dawn when he would be free again.

The longest night of the year had a lot of minutes.

Hopefully Salena would just ignore him tonight. It would be a big event in a huge castle. They should be able to avoid each other. After all, they’d managed to avoid each other for seven years since the incident. And she’d been the one to flee Annfwn, clearly to avoid seeing him ever again. He couldn’t imagine she’d want to see him now any more than he wanted to see her.

Zynda landed in the cleared field set aside for the dragons. The cold wind whipped them cruelly as soon as Rhy’s sorceress mother released her magic bubble that had kept them warm on the journey. Zynda waited only long enough for them to scramble down the rope-harness ladder before shifting into an elegant ballgown and furred cape. “Brr,” she declared, joining them. “I always forget how cold it is here in winter.”

“I don’t,” Rhy replied caustically, but subsided when his mother glared at him. They rushed up the cleared walkway, the torches lining it providing some warmth, though the flames whipped and guttered with the wind.

Guards saluted, shouting hails for Queen Andromeda of Annfwn, some giving Zynda’s husband, Marskal, the Hawks’ salute, though he was long since retired from the high queen’s elite guard. Finally, they made it inside the castle, and for once, Rhy appreciated the thick walls. The stone edifices mossbacks favored might be as confining as a cage, but they did cut the brutal winter winds.

It was like stepping into a different world—and a different Ordnung than he’d ever seen before. To honor the goddess Moranu’s rule over shadows and the dark of night, the rugs, table coverings, and other hangings were all in deepest black. They created a somber backdrop for the remaining decorations, which all celebrated the return of light. Silver and gold threads wove through all of the black fabrics, catching the candlelight. Crystal plates and goblets sparkled with fire, everything in silver and gold. White gems of all shapes and sizes studded everything, like thousands of stars, and garlands of evergreen boughs sporting white moonflowers that gleamed like sweetly scented living pearls festooned the walls, windows, mantels, and every other possible surface.

The elaborate crystal candelabras—some suspended by silver wires, others perched in clusters on every surface—held white candles blazing with light. More moonflower garlands dripping with flashing crystals, and possibly diamonds, hung in graceful swoops from the high ceilings.

Scribes sat at black-draped tables scattered throughout the busy reception hall, using flashing crystal implements to take notes for fancily dressed folks speaking earnestly to them. In other places, hammered gold bins held countless rolled scrolls of paper, with empty tables beside them, writing implements at the ready.

Rhy had no idea what that was about, but he had to admit—silently, in the privacy of his own head—that the mossback celebration of Moranu’s feast outstripped the one in Annfwn. Certainly more elaborate. But then, mossbacks always did like things.