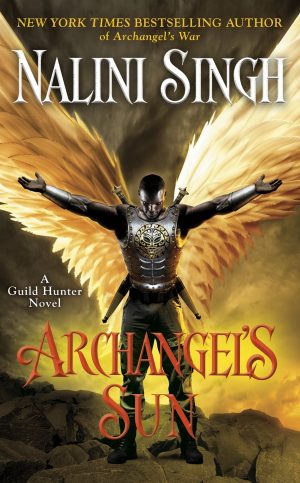 In the post-Cascade world, the Archangels find themselves struggling to rebuild their respective territories, and with some of the Cadre recovering or Sleeping, their numbers are spread thin. Titus, Archangel of Africa, inherited northern Africa from Charisemnon and is engaged in efforts to rid the continent of the virulent reborn created by Lijuan and Charisemnon. Sharine, aka Lady Hummingbird, lives in Morocco overseeing Lumia, the repository of angelic art and treasures. Raphael asks his dear friend, Sharine, to join Titus’s efforts.

Readers have long known the Hummingbird as the talented artist and fragile mother of Illium. Although, in the last couple of books, Sharine has been finding herself again. She is old – nearly Ancient – and has forgotten more than she remembers. But now that she’s emerging from the kaleidoscope in which she was lost, we learn that she’s extremely strong, with some powerful gifts. Much of the first part of the book is spent learning what happened to break Sharine and her remembering lost bits of her past, including offensive powers that help in the fight against the reborn.

Titus is fantastic. He’s confident, bold, powerful, and strong, just as an Archangel should be. While Sharine lumps him in with those like the father of Illium, she quickly learns that Titus is generous, kind, and thoughtful as well. I love how he is expecting the Hummingbird, but is thrown by the confident, bold Sharine.

Together and apart, they take on the reborn, discovering new strains and terrors, going through Charisemnon’s notes to discover what horrors he completed before he was killed by Titus. While I liked the adventures, they just didn’t hold my attention. I found I really didn’t care all that much about the evolving reborn, and the battles became unappealing after the first couple. Gaps of time are explained away with “weeks of fighting,” and the two main characters spend more time apart than together. Their romance is extremely slow burn, which isn’t necessarily the issue, but rather, I just didn’t feel connected to their budding romance. I enjoyed their conversations and play, but I never felt fully engaged.

The Guild Hunter series by Nalini Singh is one of my all-time favorites. With that said, Archangel’s Sun, was just okay for me. I didn’t dislike it, but it was slow and sometimes repetitive, with weeks of battles and gaps in time. It reads like a transition story – going from war to recovery, sharing the difficulties of rebuilding. Hopefully by the next book, the world and Archangels will be back to normal, or rather the new normal.

My Rating:  B-  Liked it, but I had a few small issues

The Archangel of Death and the Archangel of Disease may be gone but their legacy of evil lives on—especially in Africa, where the shambling, rotting creatures called the reborn have gained a glimmer of vicious intelligence.

It is up to Titus, archangel of this vast continent, to stop the reborn from spreading across the world. Titus can’t do it alone, but of the surviving powerful angels and archangels, large numbers are wounded, while the rest are fighting a surge of murderous vampires.

There is no one left…but the Hummingbird. Old, powerful, her mind long a broken kaleidoscope. Now, she must stand at Titus’s side against a tide of death upon a discovery more chilling than any other. For the Archangel of Disease has left them one last terrible gift…