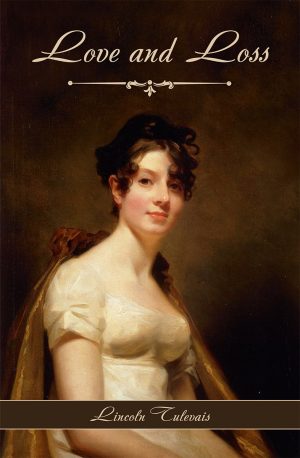 This account of my parents’ courtship is based on my mother’s extensive correspondence and diaries. I give my thanks to Miss Wallace and Mrs. Robert Whitehead for providing copies of her letters in their possession. The story is further enriched by many interviews with my mother, her relations, and my father, embroidered with as little imagination as possible. My parents were such a remarkably happy couple that they seemed destined for one another. Yet, their fates were not so assured, and certainly did not seem so to them at the time. I hope, Dear Reader, that this account will prove as entertaining and instructive for you as it was for my siblings.

Kitty had never shown any talent or inclination for patience. Most particularly now.

After weeks of fretful suspense, Kitty spied Uncle Tinsley’s coach through the parlour window and threw open the door for him. He was a tall, handsome, impeccably groomed man. His black hair had dimmed to grey, but he still possessed the penetrating dark eyes and black brows of his youth. His parents had named him Pericles, which suited his appearance perfectly. After he put off his hat and gloves, she greeted him warmly with a peck on the cheek.

Once they were seated in the parlour, Uncle Tinsley began with, “I have received an encouraging reply from an agent regarding Dixon Cottage. It is only sixteen miles to the west of here, situated between Threlkeld and Keswick. They offer it for sale complete with furnishings for seven hundred pounds. That is a bit dear for its size, but gives me hope that it is well fitted up. I have set an appointment for three days hence.”

“I have long dreamt of the day when I would manage my own household. But now that the necessity is thrust upon me, I find I don’t want it at all! I am grateful to be your ward, but I find it impossible to be happy about leaving the rectory,” Kitty replied.

Uncle Tinsley gently patted her hand, “It is far easier to be brave from the shelter of your parents’ loving guidance and much more difficult without it, eh? Do not be anxious, my dear. I do not fear for you, for you are a remarkably clever young woman and you still have me and Aunt Eliza for help.”

At the appointed hour, a sedate entourage of Kitty, Uncle Tinsley, and their servants, set out early on a bright, cold spring morning. Kitty and Uncle Tinsley isolated themselves in Papa’s conservative black coach drawn by Castor and Pollux teamed under Pike’s expert driving. The servants trailed behind in Uncle Tinsley’s equally conservative coach.

Kitty twisted the ends of her bonnet ribbons. “Well, Uncle, let us hope that Dixon Cottage suits. For if it does not, I do not know what is to become of Father and me. Although it will only be for three days, I am uneasy leaving him.”

Uncle Tinsley laced his hands together in his lap. “Biddle will take good care of Merit, so, I rate that as the least of my cares. I am more anxious about so great a burden being thrust onto your slender shoulders.”

Uncle Tinsley’s speech only served to remind Kitty of every painful feeling. She still needed considerable time alone to heal, preferably on her favourite mount, Othello. So, she avoided thinking about her situation unless she was alone and could give full vent to her feelings.

She attempted a light-hearted response. “Now, Uncle, you know I believe that with thrift, I shall be able to keep Othello and my wheelers, Pollux and Castor; which is the crux of the matter for me.”

Her uncle frowned, “My dear girl, even if you keep your horses, I worry for you. Oh, not the immediate housing problem, we shall solve that easily enough. But, I find it difficult to believe that you will achieve a respectable marriage, much less a brilliant match, without your mother sponsoring you for a London season. Do not give up hope …”

“Give up hope?” Kitty interrupted, “Certainly not! I will not be in danger of spinsterhood for another five years, at least. Surely, in all that time we can contrive something.”

Their interest was then engaged by the wild beauties of the landscape. As they made their way west, the ground rose up from hills to high mountainous fells. The carriage rumbled across uncounted ancient stone bridges. The giant broad-shouldered peaks were spectacular – almost level at the top, with steep cliffs plunging into narrow valleys. Dark swaths of still-bare trees marched along the valleys and gave way to gorse and heather on the wind-swept tops. The sky was the deep blue only achieved at the roof of the world. Innumerable little streams wound their way through the valleys, some still frozen to glittering immobility.

The villages they passed through were laid out along the road. Squat buildings with brightly painted trim, hard by the cobbles, with steep thatched roofs designed to defeat the snow. Kitty, enchanted, exclaimed, “How charming!” or “How quaint!” Soon they arrived at the Horse and Farrier in Threlkeld, where they were to lodge for two nights before retracing their steps.

The innkeeper and his wife, Mr. and Mrs. Brown, unused to trade from the Quality at that season, greeted them with enthusiasm. Mrs. Brown ushered Kitty and her abigail, Betsy Taylor, to their room. Kitty endeared herself by announcing, “Oh, how lovely. Taylor, you may have a bit of luncheon before unpacking my things.”

Taylor, who had been Kitty’s abigail for nearly seven years, said, “Aye, Miss. Jest let me shake out yer pink muslin, afore I go to kitchen.”

“Oh, aye, Miss, I know it well. Mr. Dixon built it when, Lord! I was but a wee lass. Mah sister kept house there for years. It has a fine prospect, but the lane to the property is sometimes impassable in winter. It was well-built, but Mr. Dixon let it decay as he got older, more’s the pity. His heirs have their own estates and no-one wants the place. Ah, here you are.”

Kitty said eagerly, “I should like to learn of the house from your sister. Is she near? Would you introduce her?”

Mrs. Brown chuckled, “Near? I should say so. She’s come to help me in kitchen since Mr. Dixon passed and is in this house now.”

Kitty’s stomach gave an audible growl, much to her chagrin.

Mrs. Brown smiled indulgently, “Tea and bread and butter’s out, and the rest’ll be along shortly. I’ll send mah widowed sister up, Mrs. Abernathy she is, when you’re done.”

He was a giant of a man in mind, body, and spirit.

He was the wrong faith, the wrong nationality, and unsuitable.

She was utterly captivated.

Katherine Elizabeth Otis, shortened to “Kitty” before the ink was dry on the parish birth record, suffered grievous losses in her eighteen years. Isolated in rural northern England, she now cares for her ailing father and shoulders all the responsibilities of a married woman but enjoys none of the compensations.

Kitty attracts the ominous but fascinating Lieutenant McLaughlin and escapes him for her London debut. In London, Kitty catches the eye of Mr. Blanchard, a stodgy widower that her family approves. Her enthralling Lieutenant pursues her to London and her fascination becomes attachment.

How will Kitty navigate the treacherous shoals among her heart’s desire, the dictates of Society, and her beloved family’s wishes?

Author’s Note: This book is “Jane Austen meets L.M. Montgomery.” It is a clean and wholesome Regency romance with zero heat.

After leading a perfectly lovely life as a wife, mother, dog-lover, and obsessive reader, Lincoln was afflicted with the special madness that compels otherwise normal people to write novels. She was having difficulty finding Regency romances that were historically correct, engrossing, and provided a satisfying emotional journey. So, Lincoln wrote her own Regency romance. She is retired and lives in Kuala Lumpur which is affordable even on a widow’s pension. Lincoln is already writing her next book in the hopes of avoiding penury while maintaining her book-buying habit. You may contact her or find links to buy the book at https://www.lincolntuvelais.com, or follow her on Facebook at Lincoln Tuvelais.