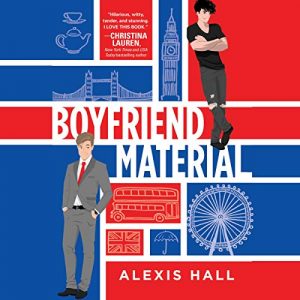 I first read Boyfriend Material earlier in the year, amid widespread anger and only moderately successful lockdowns in all the fear and uncertainty of summer. With its irresistible mix of cynicism, humor, awkwardness, and romance, it was a delightfully welcome reprieve when it was most needed—a bright spot in the dark. I admit I’ve returned to it a couple of times since then, and am extremely happy to say that the intervening months haven’t diminished it the slightest bit. These factors made Boyfriend Material one of my favorite releases of 2020, and I can offer no fainter praise for the audiobook.

One of the aspects of Mr. Hall’s romances I enjoy most is their unexpected beginnings. Luc and Oliver’s involves unrequited lust, followed by a purely transactional foundation (which is doomed from the start), and ends up wiggling and crashing its way to something completely perfect. In their case, it seems that the intention of keeping their hearts far away from “Operation Cantaloupe,” with no expectation of a return on investment, is the surest way of leaving those hearts unguarded and vulnerable. Had their best efforts not gone so horribly awry, there would be no swooningly lovely, aerodynamically-challenged Tesco’s bag imagery to sigh over. Fortunately, they did, and there was.

Having never heard a performance by Joe Jameson before, I wasn’t sure what to expect, but now I can’t imagine ever hearing these characters in anyone else’s voice. As Boyfriend Material is told entirely from Luc’s perspective, I was relieved that Mr. Jameson’s interpretation of him was such a good fit. What made his enactment truly exceptional, I think, is that I was equally delighted about his portrayal of all the other characters (especially Oliver), as well. I believe that new listeners, whether they’ve already read the book or not, would enjoy the audiobook just as much.

Once again, Boyfriend Material, by Alexis Hall, is a funny, often unexpectedly sincere tale of two men who manage to fall in love despite trying their best not to. Though fantastically unpredictable, it has everything I didn’t know I needed, but am pleased to discover I did. I very much wish that some fraction of that happiness was derived from its writing, as well. As to the narration of this edition, I believe Mr. Jameson was an amazing choice, and I honestly can’t imagine anyone else doing better. Boyfriend Material is a good story to keep, regardless of—or even due to—whatever is going on out in the world, and I hope everyone who gives it a chance will enjoy it, too.

Practically perfect in every way

Luc O’Donnell is tangentially―and reluctantly―famous. His rock star parents split when he was young, and the father he’s never met spent the next twenty years cruising in and out of rehab. Now that his dad’s making a comeback, Luc’s back in the public eye, and one compromising photo is enough to ruin everything.

To clean up his image, Luc has to find a nice, normal relationship…and Oliver Blackwood is as nice and normal as they come. He’s a barrister, an ethical vegetarian, and he’s never inspired a moment of scandal in his life. In other words: perfect boyfriend material. Unfortunately apart from being gay, single, and really, really in need of a date for a big event, Luc and Oliver have nothing in common. So they strike a deal to be publicity-friendly (fake) boyfriends until the dust has settled. Then they can go their separate ways and pretend it never happened.

But the thing about fake-dating is that it can feel a lot like real-dating. And that’s when you get used to someone. Start falling for them. Don’t ever want to let them go.