Audiobook review: She Wakes in Water by Author 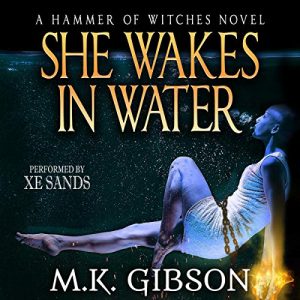 She Wakes in Water is the fabulous sophomore title in Mr. Gibson’s Hammer of Witches urban fantasy series. I was blown away once again by the unique mythology, gritty action, smart storytelling, and interesting characters. The story picks up Aggy’s tale roughly fourteen months after the climactic events of the first book. We find out that Aggy, Marcus, Callie, and the others have been targeting the remaining members of the Umbra coven. However, there is a new group of zealot humans in town, and they are killing both the witches and Aggy’s allies.

I struggle to put into words all that is She Wakes in Water; it is so complex, detailed, and rich, it truly is something that must be experienced. As with most urban fantasy stories, one MUST start with the first book (She Dreams of Fire) to fully appreciate the plot. This world is filled with various of fae creatures and fabled beings, many of which are creatively borrowed from various world mythologies. The creatures live right alongside humans, but are hidden by a magical haze to mere mortals. Aggy herself is not human, nor are about half of the main crew, which puts them right in the crosshairs of this new group.

The story is packed with intense action, keeping me engrossed from beginning to end. The primary characters live in the shades of gray between the absolutes, sometimes making difficult and ugly decisions. Shocking facts come to light in bits and pieces, keeping my heart racing. The story, which is brutal and unforgiving at times, has an undercurrent of hope throughout and I loved it, even when shedding a tear or two.

What gives this book heart is the great crew of motley characters who are closer than ever following their exploits. Yet there is some division that comes along with their mission to eliminate the Umbra coven. The story revisits many of the supporting players from the first book, as well as adds a few new ones to the mix. And like the heroes, many of the villains fall in between right and wrong. I love that Mr. Gibson keeps characters true to their nature, allowing for growth but not making wholesale changes. And the newest bad guys are downright evil in the their righteous conviction.

Narration: The story is shared via third person POV, shifting primarily between Aggy, Marcus, and a few of the other main characters. While the story’s narrator remains a neutral feminine voice, it’s deep and soft, kind of scratchy, giving a gritty feel to the dark story. Ms. Sands changes her tone for the characters’ dialogue, deepening for males, adding slight accents when called for, creating a unique set of voices for the diverse cast. She captures Aggy’s desperation and loneliness wonderfully. She injects emotion without being dramatic. I just love her soft, gritty voice.

Mr. Gibson’s world is dark and dangerous, filled with unique and engaging characters. Between the amazing world building and the small bombs dropped at the end of She Wakes in Water, I cannot wait for the next book. I need it now!

What happens when the heroes go too far?

In the near year and a half following her tragic ordeal in She Dreams of Fire, Agatha “Aggy” Grae and her allies have been hunting the remnants of the Umbra coven. By fighting back against the corrupt witches who imprisoned and killed the Fae for their blood, Aggy and her friends have become beacons of hope. But inner turmoil plagues the team, as the price for freedom is a weight upon their souls.

When an ancient curse begins to target the Fae community, Aggy, Marcus, Cally, and the rest of the team search for those responsible. But they quickly learn that not all enemies are creatures from the hidden world. Some are simply human. And when humans allow their fear to turn to hate, they become capable of the most wicked and heartbreaking acts.

She Wakes in Water is a story of sacrifice, where the heroes must blur the line between right and wrong. When they are forced to team up with an old enemy, the group’s bonds of friendship are tested, and they question whether they are the heroes or the villains of their own story. Through their successes and their losses, they will have to hold on to hope. But is that enough? Or will it cost them their humanity?

Reviews in the Series:
She Dreams of Fire by M.K. Gibson (Hammer of Witches #1) – Audiobook Review