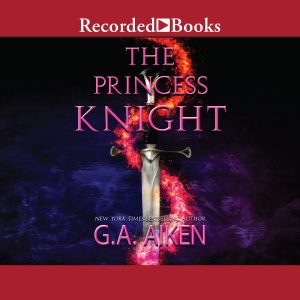 The Princess Knight opens with a short backstory of Gemma, the War Monk, learning that her sister Beatrix would be a soulless queen and that Gemma’s mentor sent her to protect her family. The story then quickly jumps to current times where Queen Keely’s troops are rooting out King Marius and Queen Beatrix’s supporters. In the process, they discover that Sirus, brother of Marius, is on a religious crusade, killing all other sects and orders while stealing holy artifacts.

Similar in style and feel to its predecessor, The Princess Knight continues the story of the Blacksmith Queen Keely, but this time younger sister Gemma has the starring role. We learn more about her journey to become a War Monk and how she is worried for Keely and her family, and she even falls in love with Quinn, the pesky Amichai warrior. The story focuses on two primary events: first, trying to stop Sirus from slaughtering innocent (and not-so-innocent) folks and second, sneaking into the Old King’s castle to uncover what Beatrix is up to.

Like the first book, The Blacksmith Queen, this story is pure chaos, jumping from one POV to the next in the blink of an eye. The story is typical of Aiken’s style, including a huge, dysfunctional, obnoxious family, continuous disorder and name-calling, lots of gore and violence, and a crude sense of humor running through out the tale. It’s a lot to take in, and it’s best just to listen and enjoy the ride rather than try to find deeper meaning in the text.

The story has a cast of dozens, but it’s mostly a story about Gemma’s faith and her acceptance of her sisters’ roles as dueling queens. And although I wouldn’t classify the book as a romance per se, the story does follow Gemma and Quinn’s journey to love. They start as most pairs in an Aiken story; bicker frenemies who find themselves constantly in the other’s presence. Quinn knows Gemma is the one for him, but gives her time to find herself and discover her path. I love how he knows when to rile her up and when to be a sounding board. He gives sound advice in the more serious moments, and it’s evident they make a great team.

Narration: The Princess Knight is shared from MANY different, constantly shifting POVs, and Ms. Barron uses the same female narrator regardless of the POV. She is bold, confident, and fitting for the craziness that is Aiken’s storytelling. The narrator uses subtle clues to indicate the quickly moving POV changes. Ms. Barron alters each character’s voice for the dialogue, making adjustments based on gender, age, species, etc. Each character has a unique and identifiable speaking voice, even though their narrator voice is the same as all characters. I enjoyed Ms. Barron’s performance; she keeps the tempo and zaniness intact.

The Princess Knight is chaotic and messy, rude and violent, but it works for me where others haven’t. I enjoy the underlying message of love and caring, not only for one another but also the various people in all the lands. And with the wonderful twist in the epilogue (fans of Aiken’s Dragon Kin series will especially enjoy!), I cannot wait for more.

Gemma Smythe dedicated her life to the glory of battle. With her fellow War Monks, she worshipped the war gods, rained destruction on her enemies, and raised the dead when the fancy took her. Until her sister Keeley became the prophesied Blacksmith Queen, and Gemma broke faith with her order to journey to the Amichai Mountain and fight by Keeley’s side.

The Amichai warriors are an unruly, never-to-be-tamed lot, especially their leader-in-waiting, Quinn. But when the War Monks declare support for Gemma’s ruthless younger sister Beatrix, the immaturity of her key ally is the least of Gemma’s problems. She has to get to the grand masters, dispel their grudge against her, and persuade them to fight for Keeley and justice. If her conviction can’t sway them, perhaps Quinn’s irritating, irreverent, clearly unhinged, ferocity will win the day.

Reviews in the Series:
The Blacksmith Queen by: G. A. Aiken (Scarred Earth #1) – Audiobook Review