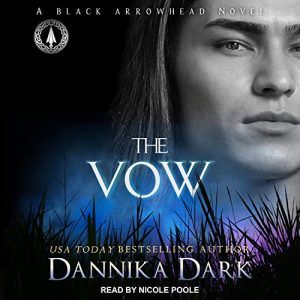 The Vow is the first book in the Black Arrowhead series and a continuation/spin-off of the Seven series. Melody is the daughter of Jericho and Lizzy the couple from Five Weeks (Seven #3) and Lakota is the son of Ivy the heroine of Four Days (Seven #4) and the adopted son of a couple in the novella, The Gift (Mageri #5.5). All of Dark’s series are linked by a character or two and The Vow meshes two of her previous series with Melody, Lakota, and Hope (Melody’s BFF and Lakota’s half-sister). With all that being said, Dark does a great job explaining the world and you could easily pick up with The Vow as your first Dark novel, but I highly recommend all her novels. You can find a reading order at Dannika Dark’s website if you want to experience these characters and the world from the beginning.

I knew if Dannika Dark was to ever revisit Melody and Lakota it would be in the form of their HEA. There was a connection between them when they were younger. He was a few years older and Melody had a crush on him and he saved her life. The Vow brings us to the pair as adults who have stayed in contact over the years through their relationship with Hope, Lakota’s sister, and Melody’s best friend and now business partner. The two may not have seen each other much during the years but they always ask Hope about each other when they speak with her. It’s the business Melody and Hope is starting that brings Melody and Lakota face to face.

Hope makes jewelry and has lost her contact for gemstones within the Breed world, leaving her looking for a new supplier. She has three leads but only time to meet with two of the three who are in Texas. The third and the one who Hope really wants to work with is in Oklahoma. Melody agrees to meet with the one in OK. That’s where she runs into Lakota, on the tribe land where the gemstone dealer lives. But because Melody is not of Native blood he will not agree to work with the girls.

Lakota is a bounty hunter and is working a case on the tribe’s land. It took him a while to get into the good graces with the tribe because he only has Native American blood from his mother. His blue eyes remind the others he is not part of the tribes. Melody and Lakota agree to act as though they don’t know each other so Lakota’s undercover status is not blown.

There is a serial killer loose killing shifter women and at first, all the clues point to someone within the tribe Lakota has befriended. As the case gets more dangerous for Melody, it becomes apparent someone is trying to frame the tribe in order to start a war between shifters who are not tribe members and the tribe.

The Vow is chock-full of action, mystery, romance, and a sexy hero who has been in love with the strong heroine since they first met all those years ago and a heroine who tries to deny the fact she too is in love with the hero. Fans of Dark’s Seven series will enjoy the ride to their HEA and the cameos from the earlier books. I look forward to more stories within the Black Arrowhead series, I can only guess we will get more HEA for the kids from the Seven series who are now adults, like Hope and Melody’s twin brothers Lenon and Hendrix (yes they are named after the real-world musicians because their dad was a rock star).

Poole is the reason Dark is an audio-only author for me. I cannot rave enough about Nicole Poole’s narration performance for all of Dark’s titles and she brought her A-game for the first book in the Black Arrowhead series.  She masterly voices all the characters from the female to the male.

Sometimes a wolf has to stand alone to find out what he’s made of.

Melody is an ambitious entrepreneur who has always loved the thrill of a new adventure, but she’s about to get more than she bargained for when the only way to save her business is to secure a deal with a powerful tribal leader. Running Horse, Oklahoma, isn’t on the map, and Mel is about as lost as a Shifter can get. When she unexpectedly runs into her best friend’s brother, her friendly visit quickly turns treacherous.

Lakota Cross is a man with secrets. While tracking a killer, he reunites with Melody, and their friendship sparks into a passionate affair. But if he doesn’t quell the fire soon, it might burn out of control.

Once again, fate brings these two Shifters together in a moment of need. But will the sacrifice be greater than the reward?

Murder, mayhem, and a mating ceremony.

Reviews of Books by Dannika Dark