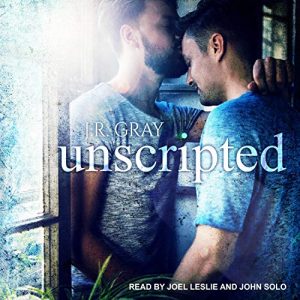 Quellcrist King is one of Hollywood’s hottest actors: gorgeous, talented, and so devoted to his wife that they are the fairytale-perfect couple. At least, the latter was true until she informed him that his depression made him too much of a downer to handle and left. Freshly separated, Quell throws himself into his next project: a new, direct from the bestseller lists-to-streaming service gay pirate sci-fi series. So what if the most intimate scenes involve his character being with another man? Fake sex is fake sex, after all. Except, what is he supposed to do when falling into bed with Hale Evans on camera means falling in love with him for real off screen?

When I first started listening to Unscripted, by J.R. Gray, I didn’t realize how much I’d missed out on by starting the series with Unwritten, the third book which was rightfully billed as standalone and was a new release at that time. Quellcrist and Hale, the two main characters in Unscripted, were prevalent enough in that story to pique my curiosity a great deal, but I never got the chance to go back and start over again. Now, I wish I had, which makes me extremely pleased to finally have been able to do so.

One of my favorite things about Unscripted is the author’s respect for the innumerable differences in the way depression manifests, along with the complexities of treating it. Neither popularity nor wealth can be a shield from it. Access to treatment is not universally guaranteed. Not everyone will be able to live alongside those who suffer from it. Love cannot cure it. And, although this is not the first time that J.R. Gray has drawn me in with his approach to the problem through his narratives, I’m hopeful that this story is far from the last.

As much as I enjoyed the Unscripted audiobook, I’m a little disappointed that I wasn’t able to read the print version first. Both narrators did very well with their character’s approach to the compounded issues they face within the narrative, but I found John Solo’s performance to be a better fit with the personality he’s giving voice to. I had to remind myself that Hale is not only a less experienced actor than Quell, but quite a bit younger, as well. It wasn’t a huge problem, and in no way compromised the overall telling of the story, but it did pull me out of a few significant moments at inopportune times.

Now that I’ve finally experienced the start of Hale and Quell’s story, I realize I’m going to have to read the second in the Unscripted series as soon as I can. These are fascinating characters who are carrying a lot on their shoulders, both independently and as a couple. I also have to offer J.R. Gray continued credit for shining a light on some very complicated issues without offering the false promises that come with too-easy solutions. These are tough hurts, and there are no guarantees, but he still made me want to believe that the love between Hale and Quell would eventually win out, and gave me every expectation that it would.

My Ratings
Story: B+
Narration:
John Solo A-
Joel Leslie B+

Quellcrist King has been playing a part his entire life. The more famous he becomes, the more he hides. The only person he ever let see the real him rose with him from nothing to the very top.

They were the king and queen of Hollywood—and then she wanted a divorce. The only way to survive his depression is to bury himself in work. If he can be a character, maybe he won’t have to remember himself. A gay role can’t be any different than playing a straight one, can it?

But instead of finding solace in the character, he finds it in his costar. Hale becomes his best friend, his lifeline, the light in his darkness. Quell is forced to examine everything he thought he knew about himself while filming intimate scenes with Hale that feel more real than anything ever has before.

He’s lived his entire life following the script. What would life be like unscripted?