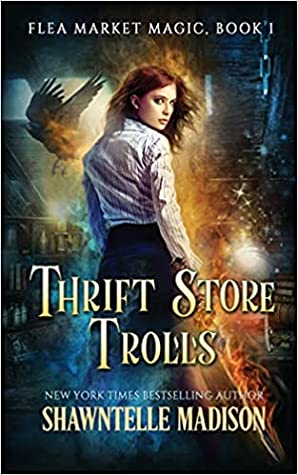 Thrift Store Trolls kicks off a new urban fantasy series, which is a spin-off from the Coveted series by Shawntelle Madison. It starts roughly six months after the conclusion of the third Coveted book, Compelled. The new series continues to share the tales of the South Toms River werewolf pack from the perspective of its Alpha Female, Nat.

As the start of the new series, Thrift Store Trolls can be read without having enjoyed the original series. It’s been a few years since the last book was released, and the author does a good job of adding information to help both new and returning readers understand the key events and details that happened prior to the start of the book.

Nat is not your typical urban fantasy heroine, and I love this about her. In fact, she struggles with severe OCD and is prone to panic attacks. She’s not the biggest and best fighter in her pack, but she’s carved her place as the Alpha Female because of love. While she is more confident in her place now than she was during the original series, she still has doubts, thankfully one of them is not Thorn’s love. I found myself annoyed on a couple occasions because I don’t want to see Nat have to prove herself to the pack over and over, but luckily, it doesn’t happen too often. And when she makes the tough calls, Thorn backs her up one hundred percent.

This time around, someone or something is leaving trunks filled with dangerous basilisks at Nat’s work, The Bend of the River Flea Market aka. The Bends. Moreover, these creatures know where she lives and seem to be coming after her. When the threat bubbles over into human areas and threatens someone close to Nat, she must work with her friends outside the Pack, and she must unify her Pack to follow her lead.

Overall, I enjoyed returning to South Toms River. There is something about the stories and characters that resonates with me. Nat has grown a lot, yet still remains a work-in-progress. She’s learning to trust others, even those who tormented her in the past. She’s on her way to becoming her true self. While there are a few problematic and/or confusing scenes, the fun of the book outweighs my mild annoyance. And I am super happy to see a follow up book is coming in 2021.

Something wicked is coming to South Toms River, New Jersey.

Selling haunted trinkets and witches’ wands is just another normal day for the delightfully neurotic werewolf Natalya Stravinsky. From one day to another, as the new South Toms River Pack alpha female, she tries to keep finicky supernatural customers placated while managing her underhanded goblin boss and eccentric supernatural co-workers. Her life is complicated further when competition rolls in: a peculiar troll-owned mart with subpar haunted knick-knacks and deadly antiques appears.

A powerful fairy path veers off course, heading towards South Toms River, attracting the attention of a deadly, shadowed force. Mysterious steamer trunks from the 1920s pop up all over town, unleashing horrific beasts. Natalya must find the inner strength to bring her pack together to uncover the culprit before her enemies threaten everyone she holds dear.