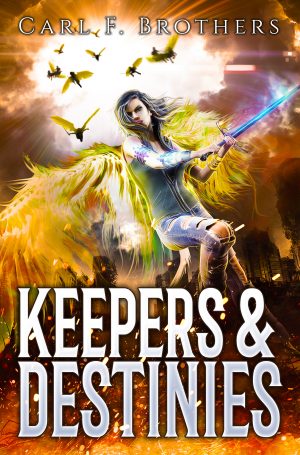 Taking in the number of empty tables and barstools broadened the smile on James’ face. After a few contented nods and a casual glimpse at his watch, he made his way to one of the tables.

Six p.m. was by far the earliest he’d frequented The Runway. The unimaginative name notwithstanding, this spot remained among his favorites, thanks to the loud, lively environment it typically boasted, which afforded him the luxury of not being stuck in his own head, oppressed by the unrelenting guilt of his past. Tonight, however, he wanted some time ahead of the boisterous hours. Some of Nicholas’ words had lingered, as they tended to, and this time James knew he had to process rather than evade them.

“Well, well, this is earlier than usual,” Suzie, the server, said. “Rough day?” She rested her elbows on the table, her top revealing more of her cleavage due to its plunging neckline.

“Of sorts,” James answered. “But not bad enough to warrant getting plastered.”

“But you’re going for it anyway, huh?” Suzie giggled.

“Well, you certainly came to the right place.”

“You just keep knocking ’em out the park, don’t you?” He smiled.

“There they are.” Her eyes lingered on the set of dimples on either cheek. “I like the clean look and the haircut,” she said. “Does wonders for those brown eyes.”

“Tell you what, James,” Suzie continued, “how ’bout I buy your first drink, and then you can tell me all about it.”

He leaned back, pretending to mull over the offer. “Well, it’s hard to say no to that drink, but I wouldn’t want to ruin your night with my boring tales.”

“Well, I’ll be back with that drink anyway. And if you change your mind about talking, I get off at midnight,” she said, walking away in a manner that suggested she knew he was watching. She was easy on the eyes and her mildly exaggerated sensual gait stretched the limits of her short black skirt. Maybe if this were a couple of weeks ago. He grinned.

Internally replaying the events of the day, his unfocused attention listlessly wandered, first to the two bartenders clearly enjoying the evening’s slow pace as they flirtatiously chatted up the waitresses turning in orders. Next, his attention was briefly drawn toward the sporadic groans and cheers from the group gathered around one of several pool tables at the far end of the bar.

Most of the patrons were paired up around the bar tables, drinks in hand, as they recounted the day’s exploits, while the few seated by themselves busily clicked away at their cell phones.

Except for one, alone at a table located in the middle of the bar, wearing a white mock turtleneck top, blue jeans, and white tennis shoes. She propped her elbow on her table, her chin resting on her palm as she gazed out through a window. Yet it wasn’t her aloofness that commanded his attention.

As if sensing his interest, her glance shifted toward him. The suave demeanor he thought he’d managed fell apart when he realized her stark resemblance to the woman from his dreams. She was unfazed by his gawking and resumed looking out the window.

Good one, James, freak her right out, he chided himself as he turned away. Still, he knew he had to talk to her. Any more time spent stealing glances would only serve to compound the awkwardness of their eventual meeting. As casually as he could, he walked toward her table, frantically contemplating his icebreaker. He re-evaluated his appearance: checkered short-sleeved shirt, the top button undone, partially revealing a cross pendant chain, and grey jeans and brown boots. Nothing that would leave a bad impression, he hoped.

“Hi, I’m James. Sorry for staring earlier, but have we met before?” he asked politely, hoping his fluster wasn’t detectable.

“Right, I’m sorry. Do you ever meet someone and get the feeling you know them even though you can’t quite place it?” he asked, hoping to salvage the situation.

“You know, I’ve heard that a lot,” Andrea said, smiling.

“Really?!” He wished he’d dialed back his enthused relief.

“Yeah, typically as a pick-up line, though.”

“Geez, it took a lot of courage coming here, being vulnerable and all,” he said, feigning hurt. “Can I buy you a drink?”

“No, but thanks for the offer.”

“Ouch,” he groaned underneath his breath as he ran his hands through his hair. “Forgive me if I’m being rude, but do you mind if I take a seat? It’s okay if you do, but I’d beat myself up later if I didn’t at least ask.” His tone was just as sheepish as his expression.

“Well, James, when you put it that way, how can I say no?” She smiled, offering the bar stool opposite from her.

Taking the seat across the small circular table, he was very aware of her eyes on him. The same penetrating, emerald eyes, same raven-colored hair, same olive skin. At this point he was certain she was the one from his dreams.

Just as he took the seat, Suzie approached the table with his drink in hand and a quizzical look on her face.

“Would that be all for you, sir?” she asked.

“Yes, thank you,” he replied, wondering why she was suddenly rattled.

“Maybe I made her jealous,” Andrea said, tongue-in-cheek, when Suzie left.

“She didn’t even try to take your order.”

“Why are you here? Not that I’m complaining… you weren’t expecting someone, were you?” he asked, suddenly aware of his potential intrusion.

“No. Actually, I’m a recruiter and I’m in town to find someone for a very important job.”

“So you’re not from around here, then?”

“I might be able to help if you’re interested. I work as a PI, so I could help screen candidates for the job.”

“You know, a PI is exactly what I had in mind.”

“Is that right? What are the chances?”

“This wasn’t chance. I came here looking for you,” said Andrea.

“Really? And here I thought I was the creepy dude staring from across the room.”

He was surprised by how much her giggle thrilled him.

“Were you referred by someone?”

“No, but I did see your credentials all over the news a couple of weeks ago.”

“Ah… that was taken out of context.”

“Well, then, put sending a man to the hospital into context for me, James.”

“You know I can’t really talk about that. Legally…”

“Come on. Consider this a job interview for the greatest opportunity of your life. Surely you can oblige me,” she cooed.

He shook his head and leaned back. Her disarming disposition made even her grilling seem harmless. All that mattered was keeping her talking if he had any hope of eventually demystifying her connection to his dreams. Unfortunately, that was taken out of his hands as she suddenly appeared distracted.

“Sorry I have to cut this short,” she said as she stood to leave. “We’ll talk soon, I’m sure.”

“I really have to go now. I’ll find you soon.” And with that she hurried out of the bar.

“That went well,” he mumbled dryly. In his concern not to appear too forward, he’d missed his window to obtain any valuable information besides her name. Frustrated, he downed his drink and got up to leave. One drink was enough, as he had no intention of clouding his memory of the encounter in any way.

Armageddon wasn’t a figment of some ancient society’s imagination. It isn’t centuries away, either. It’s on our doorstep. And our fate hinges on a young, overlooked angel who is desperate to prove her worth to Heaven and herself.

A Guardian Angel, Andrea, journeys to Earth on a mission to find the key to winning the final battle between good and evil. She enlists the help of James, an embattled veteran who is dealing with his own demons from the past. With threats—both human and supernatural—at seemingly every turn, the repercussions of James and Andrea’s alliance is far beyond what they bargained for.

James’ life would be so much simpler if his path diverged from Andrea’s. But he can’t shake the feeling that the impending battle is not only about settling the eons-old score between Heaven and Hell, but also for the rights to his world. Matters are further complicated when he and Andrea discover that she is not merely a chess piece but a central player in the looming apocalypse.

Time is running out, and the stakes have never been higher. Earth is the prize. The angels already had their turn, and so has mankind. Who’s next?