Heirs of Magic is a sizzling new Fantasy Romance series that is set in the world of The Twelve Kingdoms and Uncharted Realms series, but can be read without having read those previous series.

Set about 25 years after the events in The Twelve Kingdoms and Uncharted Realms series, Heirs of Magic focuses on a new generation. The heroines of those previous series have conquered evil and found the love of their lives, some started families or are busy ruling countries. It has been a time of peace and of rebuilding, but something is about to destroy that well earned peace.  Time for the next generation to shine and save the world from this new threat. 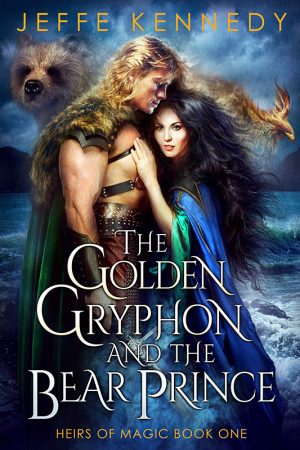 “Astar—watch this!” Zephyr’s musical shout rang out from the cliff’s edge high above. Shading his eyes against the bright tropical sun, Astar picked out Zephyr’s slim silhouette perched on tiptoe, precariously clinging to a rock outcropping. Her light silken shift fluttered around her as she raised her arms, the coastal breeze catching the long banner of her glossy black hair. He tried very hard not to notice how the thin material clung to her full breasts and the enticing flare of her hips. A gentleman didn’t stare at women that way, especially not at his friends—and particularly not at Zephyr, who could never be his.

But Astar dutifully looked in her direction and waved, knowing perfectly well she wouldn’t perform whatever trick she had planned until he was watching. Assured she had his attention, she leapt into the air in a perfect swan dive, plummeting to the glittering sea below—a drop far too great for any ordinary human to survive.

Zephyr, however, was anything but ordinary.

Still, his heart climbed into his throat as he counted the endless moments of her fall, mentally begging her to shapeshift already. An instant before she hit the water, she exploded into golden fur and feathers, her wings tightly folded against her back, lion’s body still sleekly aimed toward the waves—and she dove in, disappearing entirely.

Starting his count over, he waited for her to surface. Though she was still in her mid-teens, Zephyr was already talented and proficient enough to shift into any number of water-breathing forms. She could shapeshift into a fish and stay below the surface for hours—days, even, if it wasn’t inadvisable for the Tala shapeshifters to remain in animal form too long—and she might do exactly that, just to tease him.

Zephyr loved to tease him, and Astar did his best to pretend he wasn’t enthralled by her.

Stretching out on the white sand beach, resting his head on folded arms and enjoying Annfwn’s warm sunshine and cloudless soft blue skies, Astar tried to relax. Though he was supposed to be done growing, his joints still occasionally ached, and his mother had declared he had another finger width or two of height left in him. Like he needed to get any taller. Despite the aches and the worrying about Zephyr he couldn’t easily dismiss, he did his best to savor his last day in Annfwn. Tomorrow he’d be back at wintry Castle Ordnung, continuing under High Queen Ursula’s relentless tutelage. As her heir, he would follow in her footsteps and ascend to the high throne of the Thirteen Kingdoms someday. A crushing thought, for so many reasons.

Unable to resist checking on Zephyr, he turned his head to study the turquoise water. What if she had misjudged? The eagle parts of her gryphon form—the gríobhth, in the Tala language—might be equipped for a dive like that, but he didn’t think the lion half would be. Scowling to himself, he sat up. Should he get someone to look for her? He didn’t have an aquatic form, as he was only a partblood shapeshifter, one who only had First Form, and his was a grizzly bear. He could swim well enough as the bear, but not dive underwater for any length of time.

And Zephyr knew that, much as she liked to taunt him about trying for more forms. A frustrated growl rose in him, the bear restless and worried, pushing to be released.

Astar was just getting to his feet when a porpoise burst from the waves, becoming a songbird in mid-leap and winging to him to become Zephyr in human form—standing before him on the sand, once again in her ocean-blue silk shift, her hair tumbling in gleaming curls, sapphire eyes sparkling as she laughed at him.

Poking him in the chest with a pointed finger, she wrinkled her nose. “I gave up too soon! You were about to come rescue me, weren’t you?”

Undaunted, she gentled her skewering finger to slide down his midline. “I always need rescuing by you, my bear,” she purred. “And you were coming after me.”

He brushed her finger away—letting Zephyr touch him tested his control too far—and pretended to yawn.

“Nope. I was bored while you were playing fish. I was about to head back to the cliff city.”

“Liar. You could never abandon a damsel in distress. You’re far too noble for that.”

The Golden Gryphon and the Bear Prince by Jeffe Kennedy

Follows The Long Night of the Crystalline Moon in the UNDER A WINTER SKY fantasy holiday anthology.

A Legacy of Honor

Crown Prince Astar has only ever wanted to do the right thing: be a credit to his late-father’s legacy, live up to his duties as heir to the High Throne of the Thirteen Kingdoms, and cleave to the principles of honor and integrity that give his life structure—and that contain the ferocious grizzly bear inside. Nowhere in those guiding principles is there room for the fierce-hearted, wildly free-spirited, and dizzyingly beautiful shapeshifter, Zephyr. Still, even though they’ve been friends most of their lives, Astar is able to keep Zephyr safely at arm’s length. He’s already received a list of potential princess brides who will make a suitable queen, and Zephyr is not on it.

Zeph has wanted the gorgeous, charming, and too-good-for-his-own-good Astar for as long as she can remember. Not that her longing for him—and his perfectly sculpted and muscular body—has stopped her from enjoying any number of lovers. Astar might be honorably (and foolishly) intent on remaining chaste until marriage, but Zeph is Tala and they have no such rules. Still, she loves Astar—as a friend—and she wants him to at least taste life before he chains himself to a wife he didn’t choose. There’s no harm in him having a bit of fun with her. But the man remains stubbornly elusive, staving off all of her advances with infuriatingly noble refusals.

A Quest to Save the World

But things change when a new terror threatens the Thirteen Kingdoms. Following prophecy, Astar and Zeph—along with a mismatched group of shapeshifter, warrior, and sorceress friends—go on a quest to stop a magic rift before it grows beyond anyone’s ability to stop. Thrust together with Zephyr, Astar finds himself increasingly unable to resist her seductive invitations. And, in the face of life and death battles with lethal monsters, he begins to lose sight of why having her, just once, is such a terrible idea…

Print will be available after release.