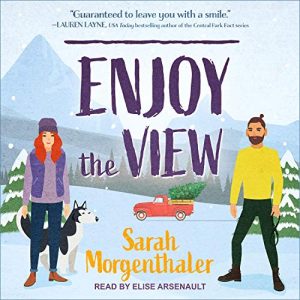 Enjoy the View is the third story set in the quaint town of Moose Springs, Alaska. This time around the story focuses on Easton Lockett, the friendly mountain man giant of the town. Trying to help a woman stranded along the side of the road, Easton discovers that there is a three-person film crew in town trying to make a documentary.

River Lane is an “aging” actress who wants to make her mark behind the camera. The chance to film a documentary in Alaska is her first break. But soon she finds out why no one else will take the job; no one in Moose Springs wants the film to be made. Luckily, she befriends Easton, whose kind nature leads to him helping her and the crew.

I made it to the 63% mark in the audiobook and then I had to DNF. Right from the start, I had issues with River. She’s strong and confident, but she’s also a brat. There is a fine line between aggressive and pushy. She is bossy and pushy with Easton often. She constantly does things against his requests, like when she wants to film his barn, he says no, and then she and her crew go ahead and film behind his back. I was uncomfortable with how she treats Easton.

Easton takes the crew on as clients and agrees to guide them up Mount Veil, a dangerous summit for even experienced climbers. Before they even start, she puts filming above safety. Then there is her thought about how he is boring when he’s giving the safety lecture for their climb. She thinks about how his hotness will only take him so far in her eyes. She and her crew constantly ignore Easton’s safety measures and rules. If I were Easton, I would have pulled the climb.

At the 40% mark, I was so annoyed, I sped up the playback speed to 1.75x. But then as River and Easton started bonding during the climb, I started to like River, figuring I’d made it past the “annoying” parts. However, at the 63% mark, River makes a decision that is so awful, I couldn’t go on. I was done. She is horrible to Easton and not a likable character.

Narration: The story is shared via the third person POVs of Easton and River. Ms. Arsenault uses a natural-voiced female for the narrator, changing up the voices slightly for dialogue. Generally, the dialogue was well suited for each character, with males deeper and more masculine; however, the author describes Easton’s voice being deep and how River often thinks his voice is sexy when it drops low, but the narrator doesn’t fit that description at all. Also, in beginning when River, Bree, and Jesse arguing, there are not many dialogue tags, and it is hard to tell who is who. With that said, I did enjoy her performance.

In the end, I found the main female character, River, so annoying and awful to Easton that I couldn’t finish the book.

My Ratings
Story: DNF
Narration: B

A grouchy mountaineer, a Hollywood starlet

And miles of untamed wilderness . . .

What could possibly go wrong?

Former Hollywood darling River Lane’s acting career is tanking fast. Determined to start fresh behind the camera, she agrees to film a documentary about the picturesque small town of Moose Springs, Alaska. The assignment should have been easy, but the quirky locals want nothing to do with River. Well, too bad: River’s going to make this film and prove herself, no matter what it takes.

Or what (literal) mountain she has to climb.

Easton Lockett may be a gentle giant, but he knows a thing or two about survival. If he can keep everyone in line, he should be able to get River and her crew up and down Mount Veil in one piece. Turns out that’s a big if. The wildlife’s wilder than usual, the camera crew’s determined to wander off a cliff, and the gorgeous actress is fearless. Falling for River only makes Easton’s job tougher, but there’s only so long he can hold out against her brilliant smile. When bad weather strikes, putting everyone at risk, it’ll take all of Easton’s skill to get them back home safely . . . and convince River she should stay in his arms for good.