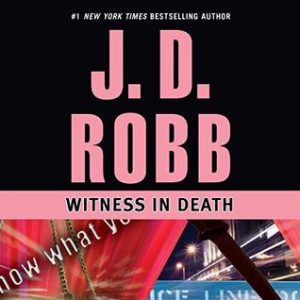 Only Eve and Roarke can attend a play where a murder takes place making them witnesses to a real-life who did it.  Witness in Death puts the couple in the middle of things while they try to figure out who switched the stage knife for a real knife.

The victim of the stabbing is a grade A womanizer, and not many of his fellow actors are sad Darco died. The investigation undercovers he is a bigger douche than everyone thought he was. His connection to some of the other characters points to him being a date-rapist and something even worse, but I can’t spill the beans on that without spoiling you.

Eve continues to have nightmares about her sexual abuse from her father when she was a small child and the night where she protected herself to the point of having to kill him.

Witness in Death is not all heavy and dark; Peabody and McNab are there to bring in some comic relief from time to time, helping to even out some of the darkness.

Susan Ericksen continues to deliver another stellar performance with the characters J.D. Robb has masterfully crafted.

It is 2059, and New York City homicide lieutenant Eve Dallas’s husband, Roarke, is producing a revival of Agatha Christie’s thriller Witness for the Prosecution. On opening night, when the villainous character Leonard Vole gets his just deserts, someone substitutes a kitchen knife for the prop knife, and the actor, Richard Draco, is stabbed through the heart. Trouble is, in time-tested British mystery fashion, everyone in the cast had good reason to despise Richard, a misogynist who seduced and discarded beautiful young women, including one whom he knew to be his daughter. It’s up to Eve to solve the case, an emotionally difficult task as she is no stranger to incest herself: she was beaten and raped by her father before she managed to escape him. As Eve fights to keep her head above water, she tries to bond at a deeper level with Roarke, so that her future will heal the pain of her past.