In the Garden of Spite 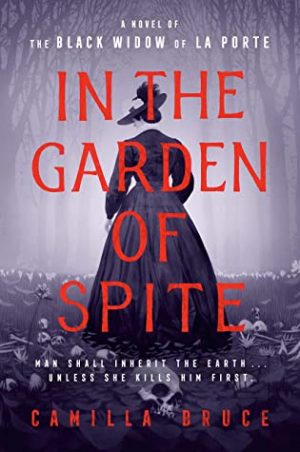 I believe In the Garden of Spite is a standalone, and it’s very different than my usual read. It’s more like something I would watch since I’m not big on reading historical fiction, but the promise of a female serial killer grabbed my attention.

Just know there is no real romance involved, sure there’s sex but not graphic and between characters who are evil and murderous. Plus the main character cheats on her husband while trying to kill him.

There were a few times I thought about putting the book down and not finishing it because I could not root for the main character, Bella. Her first victim was deserving but after that not so much, and her greed and evilness made me rethink her first victim. Sure he nearly beat her to death, but she targeted him like the others. I feel like he was her first attempt at being a cold-hearted murder, but he was more than what she bargained for. Gold-digger in the making and murderess gets her fangs wet with the taste of blood. (No, she’s not paranormal it was a figure of speech.)

In the Garden of Spite follows Bella the middle sister of a Norwegian family where she and her older sister immigrated to America. Nellie, the sister has been in America for a few years and has a family of her own and after receiving letters about Bella having troubles back home she is more than happy to help her younger sister save money to move to America.

Once Bella gets to America her relationship with Nellie and the way they lived reminded me of the two sisters in Streetcar Named Desire. Like Blanche, Bella is on the prowl for a man of means and the people living in Nellie’s neighborhood are not good enough for her (aka working-class and not rich). Bella finally gets her hooks into a man naive enough to believe she is a good Christian woman who only wants to service her husband and having a house full of babies.

In the Garden of Spite is a fictional telling of a real-life serial killer and I can’t say I was on her side after her first victim. She preyed on the men like any male serial killer does on women. The gender flip didn’t make Bella anymore redeeming than her male counterparts.

An audacious novel of feminine rage about one of the most prolific female serial killers in American history–and the men who drove her to it.

They whisper about her in Chicago. Men come to her with their hopes, their dreams–their fortunes. But no one sees them leave. No one sees them at all after they come to call on the Widow of La Porte. The good people of Indiana may have their suspicions, but if those fools knew what she’d given up, what was taken from her, how she’d suffered, surely they’d understand. Belle Gunness learned a long time ago that a woman has to make her own way in this world. That’s all it is. A bloody means to an end. A glorious enterprise meant to raise her from the bleak, colorless drudgery of her childhood to the life she deserves. After all, vermin always survive.