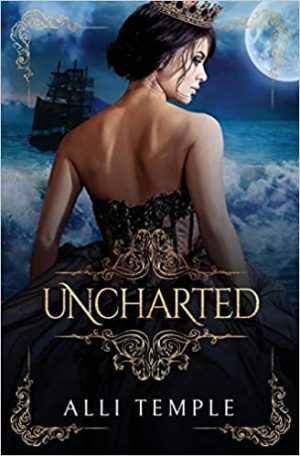 Having been fascinated by tales of women pirates for years (after reading an article about Cheng I Sao), I was very excited to read Uncharted by new-to-me author Alli Temple. Told through the experiences of Lady Georgina (aka “George”), the story begins with a plotted rebellion on land, but evolves into a seafaring spectacular before long. Though I intentionally avoided any spoilers or other reviews, what I was treated with still went beyond my existing preconceived notions, delivering up a clever, multi-layered historical romance that I liked a great deal.

Neatly divided into three parts—“The Prince,” “The Pirate,” and “The Princess”—Uncharted was fairly easy to read, despite the broader statements it tries to make regarding the politics of its main characters and the world of the story as a whole. The author actually makes thoroughly valid observations about some of these challenging situations while managing to keep many relevant to current issues. Of the sections, I found “The Pirate” to be the most enjoyable by far, and would happily go back and reread it again.

While I liked all of the characters I feel I was supposed to—and positively despised the villains, in turn—I was particularly drawn to George’s childhood companion and current savior, Lou. Not to downplay what George is going through, but Lucinda just seemed like more to me—more adventurous, more honest, more passionate, more alive… Of course, as much as I appreciated both George and Lou, I couldn’t help being equally taken with Lou’s first mate, Maro and, most especially, with George’s “maid” and best friend, Rosie. The latter was an awful lot of fun, whether playing the maid or flirting her way into the affections of the biggest brute/softy on the ship.

In its most serious moments, Uncharted takes a look at some extremely weighty issues. The oppression that is a hallmark of autocracy made worse by the double standard encouraged by the excessive wealth of just a privileged few. The commodification and/or subjugation of women thrown into further imbalance by a disproportionate share of both responsibility and consequence being forced on them. The reality of how loss affects change, and the permanence of the resulting damage, etc. As dark as these subjects are, the burden lightens considerably for much of the narrative, allowing the purely romantic aspects of George and Lou’s story to shine through.

Uncharted was, overall, a nice surprise, especially considering the above-mentioned gravity. Alli Temple clearly has a talent for adventure writing, and uses it to great effect here. In addition to her tough and battle-worn main characters, she’s created some remarkable secondary personalities, as well, and I’d be very happy to see them again in either a sequel, short, or simple anecdote later on. Though not without a passage or two that I couldn’t quite make fit in with the rest of my engagement in the story, Uncharted was a fine introduction to an author I’d like to read more from.

In a world of arrogant nobles and their punishing laws, Georgina will be hung if anyone discovers she is a spy. But when the wicked prince proposes marriage, Georgina must accept. Refusing would expose the secrets she has delivered to a hidden resistance and forfeit her life. With her wedding day looming ever closer, salvation comes from an unlikely source.

Pirate Captain Cinder is a terror on the open sea, striking fear into hearts wherever she sails. Now she has a new target. The vulnerable Princess Georgina should be an easy mark in Cinder’s kidnapping plot. However the legend of Captain Cinder is more intertwined with Georgina’s own history than either of them expect.

Treacherous storms. A mysterious pirate king. The prince’s unrelenting pursuit. Georgina and Cinder can only escape by following the uncharted course of their hearts. Just as a future together is within their grasp, Cinder’s past threatens to drag them both to the deep.