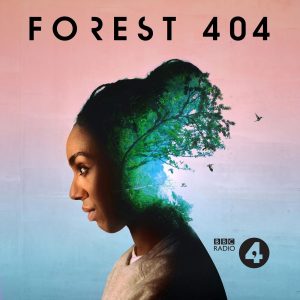 Have you ever thought, “What happens if ‘The Cloud’ gets filled up?” What happens to your digital data after you’re gone? The generations which are now on the back half of their life did not grow up with smartphones where every photo and every whim of thought gets uploaded to…where?  What happens to all that data? Set a few hundred years in the future, Forest 404’s main character Pan is a low level auditor, combing through audio files and deciding what to delete. The story begins as we listen to Pan give a cursory review of and delete forever Queen’s Bohemian Rhapsody, Pavarotti singing Nessun Dorma, and the recording of Neil Armstrong’s landing on the moon. Imagine “One small step for man, one giant leap for mankind” slipping away into oblivion as irrelevant noise that’s just taking up space. Pan’s reaction to hearing Pavarotti for the first time should have been more like JB Lethal’s.

Pan comes across an audio file, Forest 404, which is a specific recording of forest sounds. It’s like nothing she’s heard before. It comes from the “slow world,” a state of existence she doesn’t understand because it was before the great cataclysm. She and everyone else now live in the fast times. The sounds haunt her so much that she smuggles the file out so she can bring it home and continue listening to it.

The real action begins when Pan’s best friend Daria, a member of the Convocation, the police system, wants to wipe Pan’s memory when she finds out about the file. The fictional part of the book is off to a great start. I’m hooked.

Unfortunately, this is also where the format fails for me. Out of five and a half hours of audio, only about two and a half hours is actual story. Because it’s brief, it has no room for subplots. It’s straight forward, more like an episode of the Twilight Zone. Instead of chapters, it is dramatized into “episodes” and we get credits for direction, music, and acting at the end of every single twenty-minute episode. Then we get a six-to-eight-minute non-fiction podcast that relates to the episode we just heard. It included everything from Circadian Rhythms to bioethics to a poem. It is like having the author’s source material forced on you. After the podcast follows another five or six minutes of audioscapes that are also related to the episode. So, it could be six minutes of frogs or people’s voices at the beach. There are apps for this that people utilize to go to sleep…just saying.  So, for me, the format broke up the flow of the story creating instead a short story with lots of background and tangents which I found tedious.

Without spoiling the fictional sections, I can tell you it has heavy artificial intelligence influences. I’ll grant you that the story alone is ok, if not terribly original. People have been predicting the world would be taken over by AI for decades in both utopian and dystopian literature. Possibly most well-known is Asimov who wrote his short story Hardwired back in 1950 which was made into I, Robot in 2004. Asimov gives credit to a book of the same name from 1939 in influencing his sympathetic robot. It actually goes back as far as the 19th century in literature. Although organic, Shelly’s Frankenstein could be considered an artificial lifeform. In Forest 404 the most interesting thing about the interaction between humans and AI is the lack of it. While curiously original, it doesn’t make for much drama in storytelling.

I suspect I would have been more forgiving of the story if it weren’t for the narrators. Pan is played by Pearl Mackie, better known for her part as Bill Potts in Dr. Who. She and the other actors all have thick south London accents. Mackie especially speaks quickly and is difficult to follow. Think Eliza Doolittle in My Fair Lady before she has speaking lessons. Unless you are British, you may struggle to understand them. Other than that, the production values are good and I didn’t have to strain to hear any part of the recording.

Overall, Forest 404 is not an audiobook so much as it is a production about the environment and ethics of artificial intelligence. Uniquely suited to the audio format because it is about audio files, it’s not something in which I would have gone out of my way to invest my time.

My Ratings
Story: B-
Narration: D

Forest 404 is set in the 24th century, after a data crash called The Cataclysm. Pan, our protagonist, is a young woman with a boring job sorting and deleting old sound files that survived the crash. She uncovers a set of sound recordings from the early 21st century that haunt her.

They are recordings of rainforests – places which no longer exist – and Pan feels compelled to hunt down the truth about how the forests of the old world died. All the time she is pursued by the agents of the new world’s ruling powers.

The drama will provoke you to imagine the world we know today as a thing of the ancient past, to picture a scenario where all we have left of the earth’s verdant ecology is a few audio files. The big question at the centre of the tale is: what are we willing to lose, and who are we willing to become?