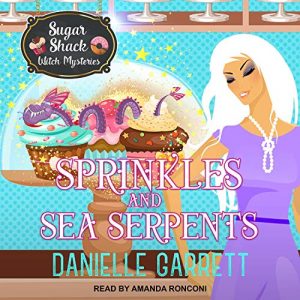 Rosella (Ella) Midnight is having a rough time: she recently split with her fiancé and just lost her reporting job because another person stole her work. Out of time and money, Ella makes the journey home to Winterspell Lake, after living on her own for over years. Winterspell is a magical community hidden in Eastern Washington, where no humans are allowed. She is considered cursed and an outcast because she has a powerful magical gift which includes the ability to communicate with animals.

Once Ella is back home, we meet her family and longtime friends. She works at her parent’s sweet shop to help out but also build up her nest egg so she can leave again. She soon finds out about the disappearance of three young women being attributed to a sea serpent in the lake. Using her gift, Ella speaks to the serpent and discovers there is more going on. Luckily, the monster-hunter brought in by the Warden of the Realm believes her, and together they investigate.

Oh, I really liked listening to Sprinkles and Sea Serpents. It’s totally new and separate from Ms. Garrett’s other paranormal series. Based on this first book, I would classify the Sugar Shack Witch Mysteries as more urban fantasy mystery than cozy mystery. There is a darker edge to the mystery and characters than those in the Beechwood Harbor universe. I was worried about bleed-over from her other works, but I didn’t detect any when reading Sprinkles and Sea Serpents.

Ella is a complex character who doesn’t really know where she fits or what she wants in life. She is uncomfortable at home and with her magic because of the stigma associated with her powers. At the same time, she doesn’t fit in the human world, having to hide who she is. I do adore her family, who loves and accepts her, and her childhood friend Matty provides unconditional love. Ella has to learn how to move past those who don’t understand her and accept that she’s a wonderful person. She starts to see this when spending time with newcomer, Orion (Ryan), the monster-hunter. He believes in her and seems to genuinely like and value her, including her gifts. I imagine will get lots more of Ella discovering herself as the series progresses.

Ella is heavily invested in discovering what happened to the missing girls, presumed eaten by the sea serpent. She sees an injustice and needs to correct it. Even though I figured out the WHO of whodunit from the second the character was introduced (I’m just very suspicious), it was fun watching Ella and Ryan piece it together. It’s a solid mystery that appears to serve as an introduction to something bigger and more sinister.

Narration: Between Molly Harper’s and Danielle Garrett’s books, I’ve been listening to Amanda Ronconi portray countless rom-com, paranormal leading ladies for years, and I am always impressed. Right from the start of this one, I noticed a slight change in Ms. Ronconi’s narrator voice from Holly and Scarlett (I’ve been listening to a LOT of Ms. Garrett’s books). Ella is going through a rough patch, and Ms. Ronconi’s voice suits the mood of the character. Since Ella can speak with animals, there are a number of distinct voices for the different species she hears, and each is fitting, from a noble but aging owl, to a nervous dog. Her male characters are generally deeper and masculine. One big stand out for me was her portrayal of the local Scottish bartender, nailing his brogue.

Overall, I enjoyed Sprinkles and Sea Serpents, with its new world and the darker tone. It’s still “cozy,” but with an edge. I am excited to follow Ella on her journey of discovering her place in the world. I like the blossoming friendship with Orion and watching her reconnect with her friends and family back home, and look forward to finding out what comes next.

They say you can’t go home again. . .oh, if only that were true.

Thanks to a series of unfortunate events – and one backstabbing frenemy – home is exactly where I’m headed. back to Winterspell Lake, the small community in Eastern Washington where magic runs rampant and humans are outlawed.

Faster than you can say hocus pocus I’m unpacking my bags and settling into the guest room of my parents’ house, trying to ignore the creeping sensation that I’ll never break free again.

The one thing Winterspell has going for it is the sweets shop in the center of town, a bakery filled with magical creations designed to enchant the taste buds and charm even the pickiest of connoisseurs. Luckily for me, I get the friends and family discount since my parents own the famous Sugar Shack. If I want room and board, I have to frost cupcakes and sling macaroons with the rest of the fam.

Unfortunately, things in Winterspell aren’t all sugar cookies and rainbows. According to the local news, a dangerous sea serpent has claimed the lives to three missing girls. The journalist in me has to have a look for myself, and what I find is something far more deadly.

Something that makes me wish I’d stayed in the bakery.