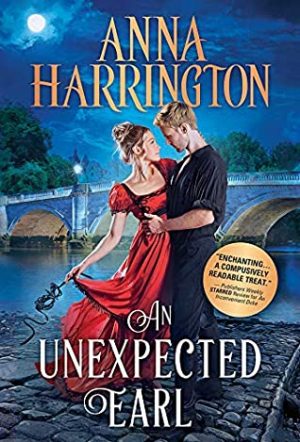 I’ve been a fan of Ms. Harrington’s historical romances for a few years now and have been looking forward to reading An Unexpected Earl since finishing the first book in the Lords of the Armory series a year ago. The story picks up with Brandon Pearce, current Earl of Sandhurst, a member of the Armory. He’s undercover, attending a party filled with known associates of Scepter, in hopes to get an invite into their depraved group. At the party, he sees a masked woman wearing a familiar locket, and realizes it’s Amelia Howard, his former best friend and first love.

Amelia Howard, sister to the Honorable Fredrick Howard, Member of Parliament, is at the party because she knows her brother is being blackmailed. Amelia doesn’t know what her brother is doing or what his secrets are, but she wants to help him and make sure their family isn’t ruined. When Brandon discovers that he and Amelia are connected via her brother’s scheming, the pair has to decide if they can trust one another and work together to help each other.

I love me a good second-chance romance, and An Unexpected Earl doesn’t disappoint. Right from the start there is a subtle yet powerful sexual tension between the pair. I needed them to reconnect badly, to share their innermost secrets and work together. Amelia is a smart woman and she mentally calculates the pros and cons of trusting Pearce. I like how she thinks it all through rather than just running on instinct. Yet, Amelia has a painful past and the memories keep her guarded, sometimes grieving for all she’s lost. There is some back and forth between the pair, but ultimately, their foundation is strong and their mutual trust allows them to move forward. I loved this pair and was completely caught up in their romance.

I also enjoy the whole Scepter aspect; it adds a depth and darkness to the stories. I appreciate the Amelia and Brandon work together to solve their mutual problems and hope that this trust and openness continues in future titles. There is a lot going on, but I was able to follow along easily. I also enjoyed a fun twist near the end of the book, figuring it out in time, but only due to the clues Ms. Harrington presented in the narrative.

Overall, I truly enjoyed An Unexpected Earl. It is exciting and action-filled. Second chance romances are one of my favorites, and Ms. Harrington excels with Amelia and Brandon. There is still much to discover and uncover regarding the evil Scepter, and I cannot wait for the next title!

Brandon Pearce, former brigadier and now the Earl West, is determined to help the girl he once loved save her property and the charity she’s been struggling to build. But he’ll have to deceive her first…

Twelve years ago, Brandon Pearce had to give up the girl he loved, Amelia Howard. Now Amelia is a grown woman with a past she desperately needs to keep hidden in order to save her brother Frederick’s reputation. In an effort to avoid blackmail, Frederick needs to place a list of gentlemen into government positions, and for that, he’ll need an ally in Parliament—Pearce.

Pearce has been investigating Scepter, a criminal group the Armory believes is behind the government appointments. Pearce must pretend that he sides with the blackmailer—keeping someone else’s secrets—even though it means breaking Amelia’s heart. But Pearce is willing to do anything he can for a second chance with her, even when he discovers she’s been keeping secrets of her own.

Reviews in the Series:
An Inconvenient Duke by Anna Harrington (Lords of the Armory #1)