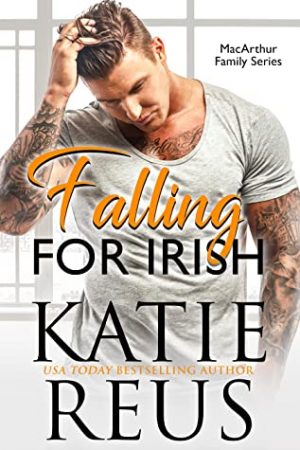 Falling for Irish is the first novella in the new MacArthur Family series by Katie Reus. It features a second chance romance between Kathryn Irish and Daniel MacArthur.

They dated a few months and then a big misunderstanding broke them up and they’ve not seen each other for two months. Until Kathryn is working a security job at one of Daniel’s buildings.

Kathryn works as a freelance security tech. She tests companies’ security systems and tells them where they have issues. Her current job has her testing a system within her ex’s company. Her hope was to get in and get out without running into him. But come on it wouldn’t be much of a story if that happened.

After they run into each other they both realize they are not over the other one. They give it another go, working through the issue that separated them while also dealing with some weird coincides where Kathryn has been mugged and jumped by a guy in a mask outside her condo. Then there’s another safety issue dealing with Daniel.

Falling for Irish was a quick and sexy read, and romance lovers of second chances will enjoy the story Katie Reus has put together. While it’s a novella it packed the punch of a full-length novella. I look for to read the other three novellas in the MacArthur Family series, which surely features Daniel’s sister, Sienna (and maybe Kathryn’s brother Carson), and his brother Brodie. Maybe we’ll find out how he spent his vacation?

She walked away once.

When Kathryn Irish realized that she and Daniel were too different—and that he thought she was after him for his money—she ended things. When a job randomly puts her back on his radar, they hesitantly form a truce. But deep down she knows she can never be just friends with him. She’ll always want more.

He never should have let her go.

Daniel MacArthur knows he made the biggest mistake of his life in letting Kathryn walk away. When she suddenly appears back in his life, it’s not a moment too soon—since she’s been targeted twice by a faceless enemy. She thinks the two attacks are random. But he’s not so sure. Is it because of her job? Or is something more sinister at play?