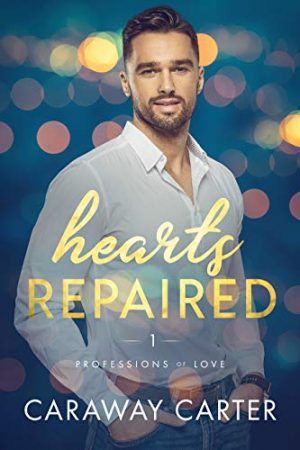 Hearts Repaired, by another new-to-me author, Caraway Carter, is a sweet, sometimes bumpy May-December romance that aims to prove love doesn’t care about the particulars—even a thirty-year age gap—when two people are meant to be. An expansion of an earlier novella (The Doctor and the Mechanic), it begins with a very promising morning after, and takes the main characters through an unexpected assemblage of ups and downs as they work towards a future together.

As much as I like the premise behind Hearts Repaired, as well as the chemistry between Curtis and Lawrence, I did have some trouble with a few aspects of the narrative. Something I discovered fairly quickly is that the blurb edges toward misleading in one significant respect: their age difference, while certainly a factor, isn’t their biggest problem. What most threatens their potential HEA is Lawrence’s certainty (instigated thirty years prior by a truly awful ex-boyfriend) that a well-educated, ambitious young doctor would never settle for a “lowly mechanic,” regardless of the undeniable evidence to the contrary.

I don’t believe the issue is about wealth so much as class hierarchy, which, within the scope of Lawrence’s specific uncertainties, I was never able to simply accept. Despite being “just some old mechanic,” his glowing portfolio, “properties,” successful auto-shop, and inherited residence, etc. are carefully noted. Curtis, on the other hand, is starting a brand new practice with a less-than-sturdy foundation and has significant concerns about his financial status for the near future. And while disregarding pain in the spirit of convenience is unacceptable, I had trouble wrangling the past and present distinctions between class and wealth and labels into a scenario I could easily roll with.

Aside from these concerns, Hearts Repaired has good things to recommend it, as well. I don’t believe May-December romances get nearly the attention they deserve, and Mr. Carter makes the flirting, hopeful shyness, and even Curtis and Lawrence’s mutual desire endearing. I also appreciated the time spent on establishing both men’s lives as separate, goal-driven entities, rather than aimless wanderings in search of a purpose. And, given their respective ages, I couldn’t help but see their pursuit of a relationship as a conscious choice as opposed to a frivolous infatuation.

Though Hearts Repaired is already a short, often-funny story that can be easily completed in a few hours, I regret not having read the original version first. I think I’d have liked seeing its evolution into a longer work myself. While I did have some trouble with a couple of passages, I enjoyed others a good deal, and had a wonderful time being distracted by a perusal of the various works of one particular artist mentioned throughout the book. Overall, I was happy for both men in the end, and I’d very much like to read the novella then revisit Hearts Repaired with a richer perspective.

A confident doctor. A sexy mechanic. A May/December romance to fall in love with.

Lawrence Barnsdale was stunned when he woke up next to a much younger man. This wasn’t his style. This wasn’t him. He knew the relationship was doomed when he realized that Curtis was smart, funny and an accomplished doctor. Why would Curtis be interested in an over-the-hill mechanic?

Curtis knew from the night they first met that Lawrence was the kind of guy he could have a future with. If only he could convince Lawrence that the age difference didn’t matter

Hearts Repaired is the first book in a May/December contemporary gay romance series. If you like second chances, real men, and finding a connection, then you’ll love this new series by Caraway Carter.