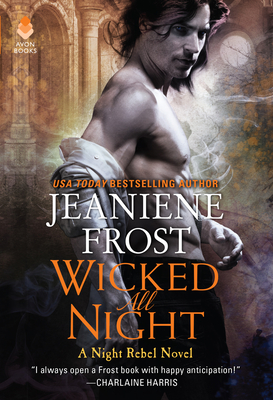 He snorted. “You’re saying I overreacted in order to protect you? If gods struck hypocrites with lightning bolts, your arse would be on fire right now.”

That was the tone for much of Wicked All Night. Ian and Veritas doing stupid stuff to save each other and then calling each other on it to prove a point they were in love and would risk anything for each other.

Wicked All Night is the 3rd (maybe the last?) installment in the Night Rebel series by Jeaniene Frost, and like books 1 and 2, it features Ian and Veritas. I say maybe the last because the plotline this time around wraps up neatly at the end with no new big bad lined up for another story.

The focus in Shades of Wicked (#1) and Wicked Bite (#2) was on taking down the demon, Dagon; now the focus is on two gods who escape Netherworld and the person who helped them (I won’t mention because it would be a spoiler for the first 50% of the book). All this is taking place while Ian and Veritas work on their marriage. They have a huge issue of protecting each other by leaving the other behind in the attempt of saving them. They are both powerful people and they forget that while the other one is in danger. They finally get it through their thick heads they are better as a team than alone. An even better realization they come to is that they don’t have to save the world alone (just the two of them), they have a support group of friends who are also powerful. They call their friends for help Assael, Cat & Bones, Vlad, Mencheres, Spade & Denise, and even Marie Laveau to take down the gods.

Wicked All Night is more action and emotional romance than sexy times, but there’s one sex scene because, come on… you can’t have Ian as the hero and not have at least one. In true Frost fashion, there is witty banter between the characters. I could not find a mention this was the last book in Ian and Veritas’s story but it felt like the end with the ending and I’m ok with that. I feel like another book would be forced. It’s time to give someone else a story and I’m hoping it’s Assael, Veritas demon, half brother.

While Wicked All Night didn’t get the A+ rating as the first two books, it was still enjoyable to read, just a bit slow in a few spots.

A gift from the gods…

Veritas and Ian have finally defeated their worst enemy, but the power it took to pierce through to the netherworld has unexpected consequences. Soon, Veritas is forced to rely on the last person she trusts—a golden deity named Phanes, who seeks far more than a temporary alliance with the beautiful vampire.

But an escape from the netherworld soon pits Veritas and Ian against supernatural beings seeking to rule over mortals once again. Now, they must rally friends and foes alike—if the vampire council doesn’t execute Veritas first. Plus, a wedge between Veritas and Ian threatens to destroy their love. Can they stand together against the unearthly powers about to be unleashed? Or does their love—and humanity—not stand a chance?