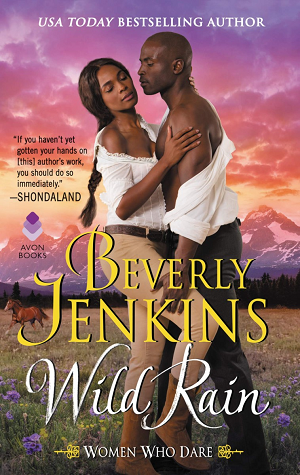 Paradise, Wyoming, isn’t like the cities back East. The mostly White residents live in harmony with the few Blacks and other non-White residents, including rancher Spring Lee and her brother, Colton Lee, the town doctor. Spring is an independent woman, owning and managing her own ranch. She’s had a rough past, but the town’s folk let her actions remain in the past.

Garrett, a lawyer-turned-journalist has traveled from Washington, DC, to Wyoming to write a story on Dr. Colton Lee, a Colored doctor. On his way into town, he is thrown from his horse and gets stranded in a snow storm. Luckily, Spring happens upon him and brings him back to her place to rest and recover.

Wild Rain is a wonderful historical romance filled with action and adventure. Although this is the second book in Ms. Jenkins’ Women Who Dare series, it is unrelated to the first book and completely standalone. (I’ve learned that this series is a mix of supporting characters from previously published works.) An Old West romance at its core, the story features a strong, unconventional woman and the man who supports her. There is ugly racism and misogyny, including references to non-consensual sex and physical abuse, all part of what life was like for a Black woman during the times. However, Spring survives her past and makes her own way, writing her own rules. I admire her strength and confidence. She has the ability to deal with and move past those who want to pull her down. She also has the support of friends and family to keep her going.

Garrett is the perfect man for Spring. He admires her unconventionality and understands she doesn’t need saving. He allows her to take care of him and sees her as an equal. One of my favorite moments in the book comes after Garrett defends Spring’s honor. He says to her that he knows she doesn’t need saving, but he couldn’t help himself. He then apologized and asks if he over-stepped. Spring acknowledges that sometimes a girl gets tired of fighting alone. Their interactions are honest and open, creating a bond that is immensely special.

In addition to their budding romance, each has to deal with family issues and come to terms with what a future may look like. I enjoyed watching both deal with these issues, both via internal monologuing and discussing them with other characters. There are also some bad men who come to town, causing grief for the pair and the citizens of Paradise. I love how all of the components work together to weave a tale and spin this marvelous romance. I laughed, worried, cried, and rejoiced – and when a story can do all of that, you know it’s a good one.

In the end, I adored Spring and Garrett and throughly enjoyed my time in Paradise. Now I want to go back and read Tempest, the story of Spring’s brother Colt and his (now) wife, Regan.

A reporter has come to Wyoming to do a story on doctors for his Black newspaper back east. He thinks Colton Lee will be an interesting subject…until he meets Colton’s sister, Spring. She runs her own ranch, wears denim pants instead of dresses, and is the most fascinating woman he’s ever met.

But Spring, who has overcome a raucous and scandalous past, isn’t looking for, nor does she want, love. As their attraction grows, will their differences come between them or unite them for an everlasting love?

Reviews in the Series:
Rebel by Beverly Jenkins (Women Who Dare #1)