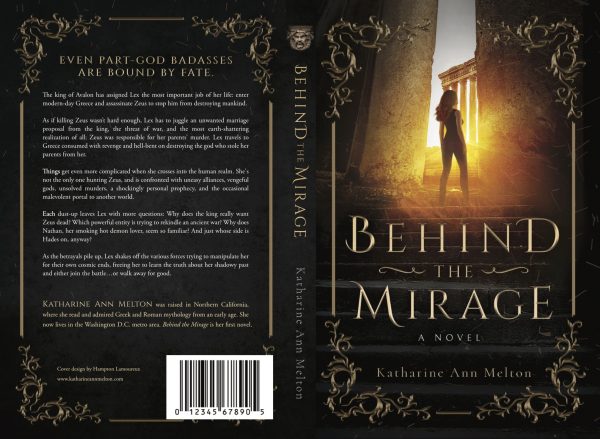 I stood in front of the barrier, pondering my next step. I’d gone over my trip to the human world in my head so many times. My life would change, but was I ready for that? I stepped up to the barrier. It moved when I touched it, like a ripple in the ocean. It was beautiful. Some people who’ve visited the other side had wonderful experiences, while others thought it was the worst decision they had ever made. They had found the human world full of hatred and deceit…but everyone experiences new things differently. This was the beginning of a whole new chapter in my life and little did I know how much my life would change. As I cautiously stepped through, I whispered to myself, “Here goes nothing.”

There are moments that teach you to open your heart and feel. Moments that cause you to stop and see everything around you in a different light. Of all the places to put my feet down, this was not what I had imagined. Greece was incredibly beautiful. The stone sculpture loomed magnificently. For such a ruthless creature, Zeus sure knew how to be worshiped. I was frightened and exhilarated as his beautiful eyes bored into me, like he was memorizing every detail of my being. I shuddered—would I actually come nose to nose with him? It was evening, the stars shining brightly. Time passes differently in Greece I realized. Whatever hole you’re hiding in, I thought, I hope you can see me. Know that I bring your demise. I would rip his heart out before he could take his last breath. A devilish smile formed on my lips; I felt that cold place inside of me, the place that holds my darkest desires. Sometimes it scares even me. Oberon told me it had manifested after my parents were murdered, sort of like an alter ego. Right now, it called out and I was ready to exact my revenge.

The king of Avalon has assigned Lex the most important job of her life: enter modern-day Greece and assassinate Zeus to stop him from destroying mankind.

As if killing Zeus wasn’t hard enough, Lex has to juggle an unwanted marriage proposal from the king, the threat of war, and the most earthshattering realization of all: Zeus was responsible for the murder of her parents. Lex travels to Greece consumed with revenge and hell-bent on destroying the god who stole her parents from her.

Things get even more complicated when she crosses into the human realm. She’s discovers she’s not the only one hunting Zeus, and is quickly confronted with uneasy alliances, vengeful gods, unsolved murders, a shockingly personal prophecy, and the occasional malevolent portal to another world.

Each dust-up leaves Lex with more questions: Why does the king really want Zeus dead? Which powerful entity is trying to rekindle an ancient war? Why does Nathan, her smoking-hot demon lover, seem so familiar? And just whose side is Hades on, anyway?

As the betrayals pile up, Lex shakes off the devious forces trying to manipulate her for their own cosmic ends, freeing her to learn the truth about her shadowy past and either join the battle — or walk away for good.

Katharine Ann Melton was raised in Northern California, where she read and admired Greek and Roman mythology from an early age. When she’s not visiting a fresh setting for her books, she lives in the Washington D.C. metro area. Behind the Mirage is her first novel.