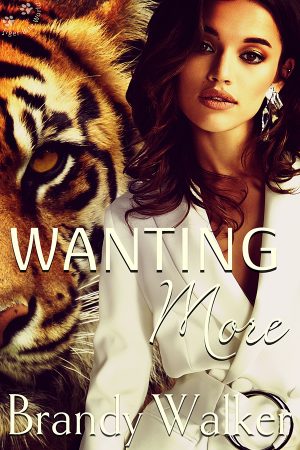 “Bodie.” A voice rang out, barely penetrating his thoughts. By the sharpness in the tone, he’d hazard a guess it wasn’t the first time someone had attempted to get his attention. Still, it wasn’t enough of a dent in his consciousness to pull him back to his surroundings. No, his mind, body, and soul were enraptured by the striking brunette opposite him. He couldn’t, in fact, take his eyes off her even if he deigned to do so.

The mere sight of her had his tiger perking up and prowling beneath his skin, aching to get out. Something he hadn’t felt happen in his entire illustrious twenty-five years of life. Every instinct kicked in and pushed him to get closer to the woman. Breath in her scent. Feel the smoothness of her skin. Coax the tiger lurking beneath the exterior out and into the open. His own tiger was focused solely on her. Single-minded, nothing could take his attention away, focus. Which in turn, he realized and let out a low huff, had him unintentionally ignoring everyone around him. At an event he needed to pay attention.

She shifted where she stood, rocking to the side, jutting her hip and placing a slim hand on her waist. He didn’t even bother trying to stop from tracing every line of her body, eyes roving over from head to toe. Her tall, willowy frame was hugged ever so enticingly by her pink, silk bridesmaid dress. Her long legs, tiny nipped in waist, sharpness of her collar bones; all of it had him panting on the inside.

He flexed his fingers before making fists, digging claws into the palms of his hands to fight the urge to rush to her and skim them over every enticing inch of her body. He pushed a slow breath out through his lips. One would think he was going feral from the way he was acting.

How she looked wasn’t the thing pushing him closer and closer to the edge. It was the slender column of her neck that was driving him mad. Her hair was pinned into a gravity defying, intricate knot of loops and curls, showing her neck off to perfection. F**k, he would do just about anything to get up personal. Feel the beat of her pulse beneath his lips seconds before he bit her, sinking his teeth into her skin to lay claim to her.

Oh, hold on. Everything came to a screeching halt. Birds stopped chirping. Trees didn’t make a sound where they rustled nearby. He couldn’t even breathe, the air freezing around him.

Those were not the thoughts of a man who felt an instant zing of attraction to a beautiful woman. Those thoughts belonged to a man who’d found and was ready to claim his mate. There was no way in hell that could be what was going on. He couldn’t have found his mate at the wedding of a good friend. A mate who bore a striking resemblance to that same good friend.

Jessie Montgomery-Murphy is ready for more. Fun that is. Something along the lines of hot and intimate. The man she’s had a crush on for years and is staring at her at her brother’s wedding looks to be the perfect candidate. She wants a no-string attached, no plans for the future, good time, something Bodie fits to a T. She wants to take what she wants, when she wants and not have to worry he’ll want more. If she starts to feel the mating pull earlier than expected and its tugging her right to Bodie, then she’ll deal with that later.

Bodie Donalson likes to think of himself as the guy people can rely on. He gives his time to his friends when they need it and sometimes when they don’t. His always be there attitude has resulted in a bit of a no-plans, nomadic life. He’s fine with it. It’s difficult to put down roots when you’re still waiting for the pull of your mate. After an encounter with the sister of his good friend, he’s got a good idea who his mate is. But she’s young and driven and not nearly ready for the kind of commitment he wants. He’ll take what she gives him, no matter how much his inner animal wants more.

Brandy is an American romance author who dipped her toe into the writing world in 2013. With over twenty books to her name, she discovered along the way that she was enamored with shifters, magic, and all of the creatures she could dream up at night. She also writes contemporary romances inspired by her love of coffee and her husband’s lifelong career in the Army jumping out of airplanes.