Today we welcome author Missy Jane to the blog. She’s here celebrating her upcoming title, Born of the Forbidden. Please welcome Missy Jane to That’s What I’m Talking About!

One of the things I love about my Gargoyle Masters series is that each book focuses on two couples. In books one and two that meant two heroines, but my muse at the time gave me women who were not warriors. In Born of the Forbidden, one of the couples is Adalstan and Brónach, who happens to be from the Kingdom of Keva. In my world, Keva is a nation of warrior women not unlike the Amazons. The Kevan women have been mentioned many times in the first two books, but Brónach is the first main character to display their strengths and skills. Of course, one of her weaknesses turns out to be a certain hunky gargoyle, but who can blame her?

The Gargoyle Masters are men who were created full grown by wizards to protect the human kingdom. They turn to stone when fighting, which includes the appearance of wings outside their clothing. They’re stronger, faster, and have superior reflexes and senses. They’re also gentlemen and very easy on the eyes. Brónach certainly can’t help being charmed by Adalstan no matter how hard she tries. 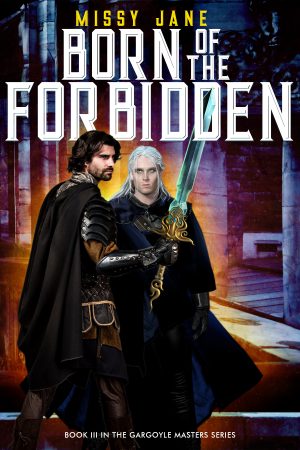 The sky above was still bright, but the sun was already on its downward slope. She knew the gargoyle beside her had the strength of ten men and could easily carry her weight across the whole of Lenara. The problem was, she couldn’t risk being seen with him by one of her sisters. All the houses knew of her reputation for not quite following orders and finding trouble even where none seemed to exist. If one of them saw her being flown in by a Master, they would run to Neasa or her Second, Angelise, in a heartbeat to report the matter.

“I thank you for your concern,” she said finally. “But there’s no need for me to rush quite that much. I can make it to the border in good time on my own two feet.”

He stopped her with a hand at her elbow. “Are you afraid of flying?”

She turned to face him. “Of course not. I’ve been on the backs of our dragons a time or two.” She failed to add that it had been after she’d been captured from trying to run away as a youth.

“All right then, let us fly and be there faster.”

“No, thank you.” She pulled her arm from his grasp and resumed walking the well-worn path between the castle city of Algorean and Groveland. Without a word, he fell into step beside her. She also said nothing for the beat of twenty paces, but then she couldn’t take it anymore.

“What are you doing?”

He frowned. “What do you mean, what am I doing? I’m walking, obviously.”

After a deep breath for patience she waved that away with one hand. “Well, yes, I see that. But why are you walking with me? Don’t you have somewhere else to be? You’re supposed to go home and guard the babes.”

“True. But I find myself concerned about your welfare, and as a guardian of the realm, it’s my duty to see you safely to the border.”

She stopped walking and spun on her heel to face him with her hands firmly planted on her hips. “Goddess be damned, that’s just not true.” Why was this man so damn stubborn?

“You know, I wouldn’t say such things about the Goddess if I were you.”

The quirk of his lips belied his serious demeanor. The damn man was trying not to laugh at her!

“The Goddess is made of sterner stuff than you, Master Gargoyle, and so am I. I don’t need an escort to the border, thank you very much. You’re welcome to be on your way back home where you’re needed.”

Adalstan watched the fire in her eyes and fought to keep his amusement at bay. She tried so hard to be threatening yet he simply found her adorable. Luckily, he knew better than to voice that opinion.

Some desires are too strong to be denied.

Master Steinn is loyal to his brothers, his King, and his people, but his desire for another man is leading him into unchartered territory. As a Master Gargoyle he protects the realm, but did he inadvertently bring on a threat from the Varish with his taboo encounter? Despite being made of stone, the strength of his feelings for Zephyr may be more than he can fight.

Brónach’s gift of foretelling is often a curse. The jumbled images she dreams aren’t usually helpful, but this time the danger is clear. Relaying the message is the easy part, the challenge comes in ridding herself of the one gargoyle who stops her heart.  Adalstan has no clue she’s desired him for years. Now she finally has his attention at the worst possible time. Will he hate her once the full foretelling is revealed?

Twelve brothers turn to stone to protect the human realm, but they can’t protect their hearts once they find the mates who call to their souls. As they battle the unexpected feelings within, a battle wages in their city, a prophecy comes to light, and the fate of the entire continent is at stake. 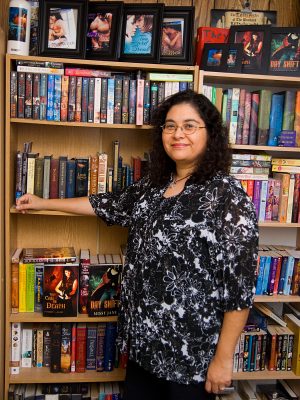 Ms. Missy Jane is the alter ego of a Texas mother of four who has been married to the same wonderful man for over twenty years. She now spends most of her time lost in worlds of her own making alternately loving and hating such creatures as vampires, shape-shifters and gargoyles (to name a few).  When not writing, she spends her time reading, taking photos of her four wonderful children and training her husband to believe she’s always right. More info about Missy can be found here: linktr.ee/authormissyjane