An Echo in the Sorrow 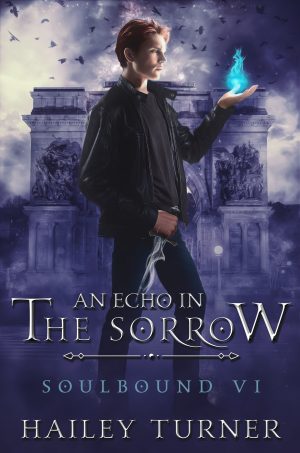 Forgiveness is a hollow prayer you only hear in your dreams.

Patrick Collins has spent years handling cases as a special agent for the Supernatural Operations Agency, even as his secret standing in the preternatural world has changed. He should have confessed to his role as co-leader of the New York City god pack when he and Jonothon de Vere took up the mantle months ago, but he didn’t. Now that split loyalty will cost him at a time when he can least afford it.

Outmaneuvered, framed for murder, and targeted by the Dominion Sect, Patrick has to face a past full of lies to regain his freedom. Revealing the truth means he’ll need to give up the life that has defined him. Everything he’s fought to build with his pack is at stake, and losing them isn’t a price Patrick is willing to pay, but some choices aren’t his to make.

Jono knows they can’t cede any more territory if they want to win the god pack civil war spilling into the streets of New York City. But the souls of werecreatures are free for the taking when demons come to town and angels sing a warning no one can ignore. When Jono’s worst fear comes to life, and he loses the one person he can’t live without, the only option left is to fight.

Facing down the demons of their past and the ones in their present, Patrick and Jono will learn the hard way that some sins never wash away clean.

An Echo in the Sorrow is a 118k word m/m urban fantasy with a gay romantic subplot. It is a direct sequel to On the Wings of War. Reading the first book in the series would be helpful in enjoying this one.

Jono shed his own sleeping clothes, stepping into the tub beneath the spray of hot water. Patrick joined him seconds later, and Jono maneuvered them so Patrick stood beneath the spray. Jono reached for the soap, running it over Patrick’s shoulders and down his back. They both had space to move around in, but not a lot, and Jono’s elbow kept brushing against the shower curtain as he slowly washed the sweat and grime and lingering traces of hell off his lover’s body.

The muscles of Patrick’s back were knotted, and Jono took his time to work them out with hard presses of his fingers and thumbs. Soap eased the glide of his hands as he cleaned Patrick, steam from the hot water filling his lungs. The hellfire stench swirled down the drain until all Jono could smell was Patrick.

He dragged the tip of his nose up the curve of Patrick’s spine as he rose to his feet, letting his lips linger over warm skin. Jono pressed a kiss to Patrick’s shoulder, wrapping his arms around Patrick, hands skimming over smooth skin and the ridges of scar tissue. He stepped back, pulling Patrick with him, until the water beat against his scarred chest.

Patrick tipped his head back against Jono’s shoulder, dark red hair plastered to his skull, lashes spikey from the water. Jono nuzzled his cheek, breathing him in. Patrick’s mouth parted on a quiet gasp when Jono wrapped his hand around Patrick’s cock, slowly stroking him. Water eased the motion, and Jono splayed his other hand over Patrick’s stomach, holding him close. His own cock was nestled at the top of Patrick’s arse, and he rolled his hips, grinding slowly against slick skin.

Patrick arched against the pressure and the touch, humming softly, eyes still closed. “Gonna have to clean me up again if you continue.”

Jono kissed the corner of his mouth, rocking forward. “Travesty.”

Newsletter:  You can keep up with Hailey’s future projects by joining her newsletter, where you can instantly download several free short stories:  http://bit.ly/HaileyTurnerNews