Audiobook review: A Game of Cones by Abby Collette 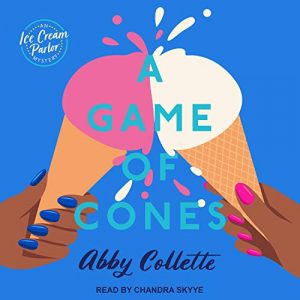 Set in the small tourist town of Chagrin Falls, OH, A Game of Cones book opens in summertime, with main character Bronwyn (Win) out straight due to the success of her newly renovated ice cream shop, Crewse Creamery. At a meeting for local business owners, residents are told that an out-of-town development company is buying up lots in the town center and plans to build a mall. When the man who presents the plan to the town turns up dead the next day, and one of Win’s friends is the primary suspect, the gang decides to investigate the death on their own.

After enjoying the first book in the Ice Cream Shop cozy mystery series, I looked forward to listening to this follow up tale. However I found things that were annoying in the first book seem to multiply and intensify with A Game of Cones. I would enjoy stretches and moments, but then something would happen to annoy me.

Overall, Win’s friend Maisie is utterly annoying. She is impulsive, obnoxious, and immature. She is obsessed with discovering who the murderer is and makes all sorts of wild accusations. The alone is frustrating, but then Bronwyn starts following suit. Win and her friends act without thought, are rude, and have no tact. In fact, Win loses a catering order because of her behavior at the mayor’s office. At times she is cavalier about her business that she works so hard to make successful; leaving at a moments notice and gone for hours. It’s just too over the top for my enjoyment.

Additionally, I was frustrated with the mystery itself. While I correctly guessed early on the who and why, I enjoy following the main character discover the clues that should lead them to the perpetrator. Yet, Win and her friends ignore evidence, act like imbeciles, and spread gossip. They really don’t even solve the mystery, they just happen to be in a situation where the perpetrator confesses.

Narration: A Game of Cones is shared via the first person POV of Win. Ms. Skyye gives a solid performance, creating a strong voice for Win that bends as her emotions fluctuate. She gives Win a light but confident voice, conveying her sweetness, even when frustrated. The narrator alters the dialogue for each character, modifying for gender and age. Her male voices are appropriately deeper and definitely more masculine. With the supporting characters, the voices are modified enough to make each distinctive from each other.

In the end, I found that I never really enjoyed A Game of Cones. As much as I like Bronwyn and want her to succeed, I found her friends obnoxious and annoying, while her methods for solving the case silly and chaotic.

My Ratings
Story: C-
Narration: B

Bronwyn Crewse is delighted that Crewse Creamery, the ice cream shop her family has owned for decades, is restored to its former glory and serving sweet frozen treats to happy customers in the picturesque small town of Chagrin Falls, Ohio. But when a big city developer comes to town intent on building a mall, a killer with a frozen heart takes him out. After literally stumbling across the body, one of Win’s closest friends becomes the prime suspect, and to make things worse, Win’s aunt has come to town with the intention of taking command of Crewse Creamery. Even though Win has a rocky road ahead to help her friend and keep her ice cream shop, it’ll take more than a sprinkle of murder to stop her from solving the crime and saving the day.