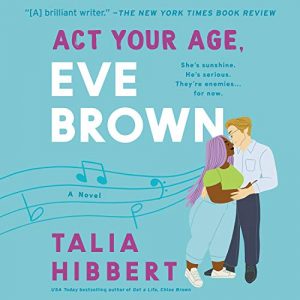 Eve Brown, the youngest of the Brown sisters, is scared of failing and believes she will eventually fail at everything she tries. So before things could so south with her latest career path, Eve pulls the plug. Frustrated with what they perceive as a lack of commitment, Eve’s parents decide to cut her off. Running from the situation, Eve ends up at a small-town, quaint bed and breakfast and decides to apply for the open cook position.

Jacob Wayne, owner of said B and B, is a control freak, and everything about Eve sets him on edge. Yet he can’t stop thinking about her and her lovely lavender hair. Deciding to give her a chance after his best friend Mont tells him he’s got no one else, Jacob heads out to the parking lot to speak with Eve where she hits him with her car. Now he’s injured and in need of aid, so Eve stays on as the cook and help until he’s back on his feet.

I simply adored Act Your Age, Eve Brown. The story features two people who are used to having a rough time at life. Eve, who knows and loves the person she is, worries about failure and tends to cut her losses before she gets too involved. She looks for a job she won’t fall in love with because she doesn’t want to fail at something she likes. She has scars from all the times her “friends” need her for something and then walk away when they get what they want. Meanwhile Jacob is abrupt and cantankerous, keeping people at arm’s length, because once he lets someone into his inner-circle, he loves them with his whole heart. He’s been hurt time after time, starting with his absentee parents.

I love that we experience both Jacob and Eve’s POVs because we understand how much each hurts, and how much each desires the other. It’s slow and lovely as Eve and Jacob connect, come out of their respective cocoons, and expand their comfort zones. I adored listening to them becoming friends and growing. It’s fun and funny, but sweet and gentle.

Narration: Once again, Ms. Butler provides the narration for the story, this time alternating the third-person POV’s of Eve and Jacob. Ms. Butler uses the same light, female voice for both POVs, with slight modifications to each characters’ dialogue voices. While it’s always clear who is speaking based on the text, the voices themselves are not all that different from the narrator. She uses slight refinements to make the voices unique and fitting. Overall her voice is pleasing, and she adds just enough emphasis and emotion, bringing the characters to life.

In the end, Act Your Age, Eve Brown is simply a wonderful tale. From beginning to end, the author pens a lovely romance with peaks and valleys, allowing each character the room to flourish and grow.

My Ratings
Story: A-
Narration: B+

Eve Brown is a certified hot mess. No matter how hard she strives to do right, her life always goes horribly wrong—so she’s given up trying. But when her personal brand of chaos ruins an expensive wedding (someone had to liberate those poor doves), her parents draw the line. It’s time for Eve to grow up and prove herself—even though she’s not entirely sure how…

Jacob Wayne is in control. Always. The bed and breakfast owner’s on a mission to dominate the hospitality industry—and he expects nothing less than perfection. So when a purple-haired tornado of a woman turns up out of the blue to interview for his open chef position, he tells her the brutal truth: not a chance in hell. Then she hits him with her car—supposedly by accident. Yeah, right.

Now his arm is broken, his B&B is understaffed, and the dangerously unpredictable Eve is fluttering around, trying to help. Before long, she’s infiltrated his work, his kitchen—and his spare bedroom. Jacob hates everything about it. Or rather, he should. Sunny, chaotic Eve is his natural-born nemesis, but the longer these two enemies spend in close quarters, the more their animosity turns into something else. Like Eve, the heat between them is impossible to ignore—and it’s melting Jacob’s frosty exterior.