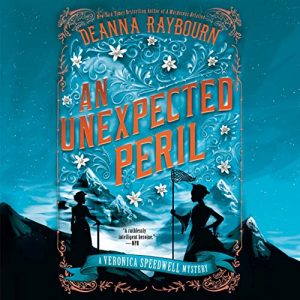 The story opens with Veronica and Stoker working on an exhibition for the Curiosity Club. They are erecting a memorial to Alice Baker-Greene, a pioneering mountain climber and member who passed away during a climb in the small country of Alpenwald, whose ruler, Princess Gisela, is coming to the exhibit opening. While unpacking some of Alice’s personal effects, the pair comes to the conclusion that Alice’s accident was actually murder. Veronica’s interest is piqued, and when she’s asked to stand in for the absent Princess Gisela during a public event, Veronica decides it’s time to do some investigating into Alice’s untimely death.

An Unexpected Peril is another wonderful story in the Veronica Speedwell Mysteries. I simply adore this series. After nearly dying a handful of times in recent history, Stoker is hesitant to get involved with an investigation into Alice’s death. But because he is such an amazing man who loves Veronica and knows her heart, he reluctantly agrees to go along with Veronica’s plans. However, that doesn’t mean he sits back while Veronica runs point; he is her partner in every sense. I love how perfect Stoker and Veronica are together; how he understands her completely and cherishes her fully. He knows what she needs emotionally and mentally, and accommodates her while protecting her. Their relationship may be unconventional, but works, and takes yet a new turn over the course of this book. They are perfect for one another, and their evolving relationship is a huge part of what brings me back to each subsequent story.

The investigation into Alice’s death is a solid mystery with interesting political ties. I enjoyed the details Ms. Raybourn puts into her fictional country, blending just enough truth with her creation creates a believable situation. I enjoyed watching Veronica piece together the clues while coming up with all sorts of hypotheses, some of which stretched the limits of plausibility. However, the need for Veronica to pose as the ruler of Alpenwald, and the almost ludicrous situations with which she becomes entangled, went a little too far for my tastes. I didn’t really enjoy the tie-in with Veronica’s birth family, and found some of the side-adventures overdone and unnecessary.

Narration: Ms. Masters’s performance of Veronica is perfect. She nails Veronica’s no nonsense and adventurous attitude. But she also captures Veronica’s just-under-the-surface vulnerability. Additionally, she gives Stoker a sexy, unfettered gruffness that sharpens with concern when Veronica is in danger or when the pair is sparring. Ms. Masters’s range of accents is excellent and sound authentic to this untrained ear, changing it up for regional and socio-economical conditions. This time around she blew me away with her performance of an American male, sounding like an entirely new actor performing. She brings the characters and action to life, allowing me to feel as if I’m part of the adventure.

In the end, I love the Veronica Speedwell Mysteries, and An Unexpected Peril is another enjoyable adventure. The overarching friendship and love between Veronica and Stoker grows with each book and gives this mystery series the perfect amount of heart.

My Ratings
Story: B
Narration: A+

January 1889. As the newest member of the Curiosity Club—an elite society of brilliant, intrepid women—Veronica Speedwell is excited to put her many skills to good use. As she assembles a memorial exhibition for pioneerring mountain climber Alice Baker-Greene, Veronica discovers evidence that the recent death was not a tragic climbing accident but murder. Veronica and her natural historian beau, Stoker, tell the patron of the exhibit, Princess Gisela of Alpenwald, of their findings. With Europe on the verge of war, Gisela’s chancellor, Count von Rechstein, does not want to make waves—and before Veronica and Stoker can figure out their next move, the princess disappears.

Having noted Veronica’s resemblance to the princess, von Rechstein begs her to pose as Gisela for the sake of the peace treaty that brought the princess to England. Veronica reluctantly agrees to the scheme. She and Stoker must work together to keep the treaty intact while navigating unwelcome advances, assassination attempts, and Veronica’s own family—the royalty who has never claimed her.