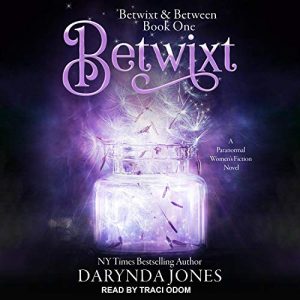 Defiance is at the lowest point in her life: recently divorced, her ex took her for everything, including the restaurant she opened. She’s broke and out of a job. Out of the blue, Defiance is bequeathed a large estate in Salem, MA, from a woman she’s never met. Packing up her small car, Defiance makes the drive from Arizona to Massachusetts, signing papers on the mysterious home.

Once there, the adventures begin. Defiance’s best friend, Annette joins her as they explore her new home and town. The house seems to be self-aware, and there is a sexy, mysterious caretaker, Roane. Together, they discover Defiance’s connection to the previous owner and the house, while uncovering some interesting family history that has huge impacts on Defiance.

Ms. Jones describes her Betwixt and Between series as “paranormal women’s fiction,” while I would call it cozy urban fantasy. Either way, this first book introduces readers to a brand-new world filled with witches and magic. Defiance is a wonderful new character. In her forties, she’s ready to put her past behind her; however, financially, she’s unable to move her life across the country. Luckily, she’s got an amazing best friend who drops everything to help her and two supportive dads who love her unconditionally. Those familiar with Ms. Jones’s Charley Davidson series will see flashes of Charley and Cookie in Defiance and Annette. They share the same fun banter, crazy sense of humor, and love of coffee.

Betwixt spends most of its page time on world-building, character development, and backstory. I found the concepts solid and mythology interesting; however, the pace was a bit slow for my liking. Additionally, I found myself frustrated with Defiance at times, and her inaction on a certain task felt repetitive.

Narrator: Ms. Odom gives the perfect performance for the first person POV, 40-something Defiance. She exudes a worn-down but calm woman who is taking one day at a time. I also found her array of female characters unique and fitting. Both females and males are adjusted appropriately for age. With that said, I was not a big fan of her male characters, especially the mysterious Roane. I think it’s supposed to be deep and sexy, but the voice comes off more like whispering, and while deeper than the females, not tremendously deep. Overall, her males are too soft and whispery sounding rather than masculine.

In the end, I enjoyed Betwixt and found the mythology interesting. Now that the world is set up, I look forward to more. I really like the main and supporting characters, but wanted the story to move along a little faster.

Divorced, desperate, and destitute, former restaurateur Defiance Dayne finds out she has been bequeathed a house by a complete stranger. She is surprised, to say the least, and her curiosity gets the better of her. She leaves her beloved Phoenix and heads to one of the most infamous towns in America: Salem, Massachusetts.

She’s only there to find out why a woman she’s never met would leave her a house. A veritable castle that has seen better days. She couldn’t possibly accept it, but the lawyer assigned to the case practically begs her to take it off her hands, mostly because she’s scared of it. The house. The inanimate structure that, as far as Dephne can tell, has never hurt a fly.

Though it does come with some baggage. A pesky neighbor who wants her gone. A scruffy cat who’s a bit of a jerk. And a handyman bathed ink who could moonlight as a supermodel for GQ.

She decides to give it three days, and not because of the model. She feels at home in Salem. Safe. But even that comes to a screeching halt when people begin knocking on her door day and night, begging for her help to locate their lost objects.

Come to find out, they think she’s a witch. And after a few mysterious mishaps, Dephne is beginning to wonder if they’re right.