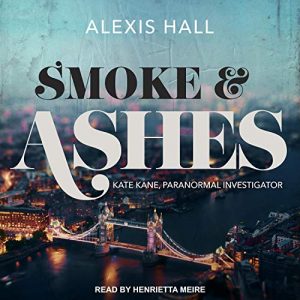 Two years before the start of Smoke & Ashes, things fell apart for Kate Kane, Paranormal Investigator. No, not like they’d fallen apart prior to that. I mean they really, really fell apart. Girlfriend abandoned her to die as an unwilling sacrifice? Yes. Every other ally either in mortal peril, in a magically induced coma, or dead? You bet. Best (only?) friend robbed of whatever magic brought her to life in the first place, thus returning her to a marble statue who is now hidden away in a warehouse somewhere in London? Absolutely. And, as effective as sex with a lingerie model-heiress-werewolf Alpha is as a distraction, it isn’t helping. Fortunately for Kate, all that chaos is still right there waiting for her to unsuccessfully avoid the minute she reopens her office for business. Lucky her.

After four novels I am happy to say that Kate Kane remains one of my favorite characters. When we first met Kate, she kept a running tally of things that had gone wrong for her. By this point in the series, however, she is both fully aware and somewhat terrified of the potentially limitless ways things might go wrong because of her. And, though it is true that Kate’s actions have often been costly, she is still a player in a bigger game, not its architect. Fated to an extraordinary life, she’s landed herself on a path where arriving at the right ending is absolutely vital, but her options for getting there are tragically limited. The whole situation would have been unsalvageable from the beginning except, well, it’s Kate.

For the first time in this series, I had mixed feelings with regards to the narration. I believe this is primarily my fault, since I was so excited about listening to Smoke & Ashes that I intentionally avoided any preparation for it aside from re-listening to the previous title, Fire & Water. In doing so, I didn’t realize that the narrator had been changed, and spent the initial chapters acclimating to the new Kate. Though she is undeniably talented, there were some aspects of Henrietta Meire’s performance that I never could settle in with. This Kate speaks faster and at a higher pitch than I was used to. Her pronunciation is more staccato than sultry. I was also caught off guard by familiar characters having very unfamiliar accents. Mostly, I think I just missed the other version of Kate—voice whiskey-bruised and battle-tattered, and all the lovelier for it.

While some series may start to falter by the fourth book, that’s not the case with Smoke & Ashes. As much as I enjoy trying to figure out the mysteries that she’s currently entangled in, it’s Kate herself that keeps me coming back. And though I always felt a little off-balance with regards to the narration, I still strongly recommend the series as a whole, regardless of format. I can honestly say I have no idea what might be next for Kate Kane, Paranormal Investigator, which is perfectly fine. I’ll be here for it.

My Ratings
Story: A
Narration: B

A couple of years ago I screwed up so badly that everybody I remotely cared about wound up dead, nearly dead, or just plain betraying me. Some days, I’m sober enough to care.

My list of “things I really don’t need right now” starts with a condescending octogenarian werewolf having a go at me for banging a Marchioness. As for where it ends, try the disembodied spirit of my ex-girlfriend stalking me in my dreams, a vindictive wizard-vampire from the first century on a vengeance crusade, being hired by the magical twin of my disanimated best friend and, oh yes, having to find the actual Holy Grail.

If I was a better person, I’d take this opportunity to put my life together. I’d find a way to fix everything I broke, save everybody I let down, and maybe pay a certain vampire back for leaving me to die. But I’m not a better person. I’m a hard-drinking half-faery train wreck on legs and if I hated myself less I might even say I liked it that way.