This review will cover the Drazen Family world featuring different series about the siblings.

Reiss wrecked me with the Drazen Family. I was a mess during and after listening to all their books. I started with Jonathan the only son in the family and follow later with the sisters who had their own stories. You can read their stories in any order. Their stories are told in different times of the family’s life. I would say Jonathan’s story is now where the sisters’ stories are more focused on the past while Jonathan was a teenage/young man. 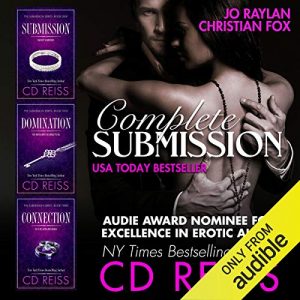 The Submission series by C.D. Reiss has gone through some name and cover changes over the years. It was first released as a serial, then a three-part series, and now you can get it as one audiobook from Audible under the title Complete Submission.

SONGS OF SUBMISSION: SEQUENCE ONE is books 1 -3 (BEG, TEASE & SUBMIT) in the Songs of Submission series by C.D. Reiss. They were originally released as a serial series and the books in the whole series are being produced in audiobook format.  I’m so glad that I got to listen to them altogether. If I had to wait for TEASE after listening to BEG I would have gone nuts. LOL

We follow the relationship between Monica and Jonathan through them meeting and working through their sexual relationship where neither wants more. But of course, after spending some time together Monica starts to hope for more even though she knows that Jonathan is not capable of more.

But Jonathan keeps Monica coming back for more because of the mind-blowing sex between them. But have no fear Reiss doesn’t write just great sex scenes. No Monica and Jonathan are deep characters with a deeper connection. And there are a few interesting side characters that bring something to the party.

While listening to SEQUENCE ONE I laughed, was turned on, on the edge of my seat, and heartbroken. The writing and narration had me feeling like I was in the story with Monica and Jonathan. SEQUENCE ONE was a total emotional ride and I want to ride it again and again.

Jo Raylan brought C.D. Reiss’s words and characters to life perfectly! Jo’s voice and Reiss’s writing totally sucked me in within the first 20 minutes of the audio. Jo Raylan delivers a great performance with this series and the parts where she sings Monica’s song are pure magic! Jo’s pitch and delivery really is something new. Her voice is smooth, seductive and she nails the male voice almost better than the female voices. It’s hard (at least for me) to find a female narrator that can be spot on with the males as well as the females.

The second installment added narration by Christian Fox. OMgoodness! His voice is pure sex and brings Jonathan’s POV screaming to life. He finished out the story alongside Jo Raylan. These two were smoking up my earbuds with their performances.

Jonathan Drazen is a beautiful, damaged billionaire with a taste for obedience.

Monica is a struggling musician who obeys no man.

But she just made a wager with him – one she’s sure she can win.

If she loses, she spends the night under his command.

If she wins…it doesn’t matter. She just found out Jonathan doesn’t lose his bets, and his women always end up where he wants them.

And this bet she’s about to lose? It’s going to turn into much, much more than she realizes. 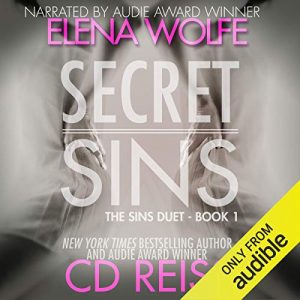 Margie’s story spans over two books, the first is Secret Sins focusing on a younger Margie and the two men she fell in love with. They were rockers and she was a little rich girl. There are huge twists and surprises in Margie’s story that would rock the Drazen family if they all knew.

While Margie starts out as the stereotype of a rich girl going out and partying and going against her daddy’s wishes she ends up being the fixer for the Drazen family as she because an adult. She saves her siblings over and over from the world and her father but not without losing parts of herself in the process.

Watching Margie grow, love, go through loss and finally find happiness was great to witness. I enjoyed the duet, but parts of Scared Sins dragged on, and I felt like the story might have worked in one novel instead of two. But then again it might have felt rushed going through Margie’s life so fast.

The Sins Duet series is narrated by Elena Wolfe and she does a great job bringing the amazing and shocking life of Margie Drazen to life.

About the Book (Secret Sins):

In the era of pay phones, groupies, and party pills, there were three of us.

Strat. A rock god who walked on air.

Indy. A handsome musician smart enough to live through stardom.

Me, a girl with everything to lose and nothing she wanted to keep.

I loved them both.

They say three’s a crowd, but maybe I liked crowds…until the one thing I wanted to keep was stolen out of my arms.

I left that world, straightened up, went to law school.

I was fine until Indy walked back into my life to remind me of what I’d lost.

They say there’s no time like the present, but when the past shows up with an invoice there’s gonna be hell to pay. 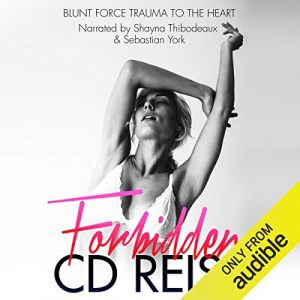 The train wreck that is The Drazen Family continues with Fiona’s story in Forbidden. Her story is another dark, twisted, sexy, and sad story.

Forbidden was originally released in three parts: Kick, Use, Break. The audiobook is one complete novel but has three parts noted making the story feel like it’s told in 3 large chapters of Fiona’s life.

Margie Drazen might have been a rock groupie in her youth but Fiona was the party girl to end party girls. She did drugs, let anyone use her body for sex and she didn’t care what people thought of her and how she lived her life until she did care.

She finds herself in “camp cupcake” rehab for the rich and famous. She can’t remember the night that landed her there but she’s told she stabbed her lover Deacon. She and Deacon have a D/s relationship with him being much older. Her new therapist throughs a wrench in that relationship.

Forbidden follows Fiona through recovery and some really dark places, past and present in her life. There is light at the end of the darkness and I’m happy she got a HEA.

Shayna Thibodeaux narrates the largest part of the story since it’s mostly told through Fiona’s POV I love Thibodeaux’s delivery of the story and characters. Sebastian York joins in when the POV changes to the two male characters.

Everything about Fiona is forbidden.

She has dark desires she can’t explain.

I’m willing to be self-destructive, negligent, brave, audacious, and stronger than I ever believed possible.

She’s blunt force trauma to the heart, and she calls another man Master.

Stay Tuned for Part 2 of The Drazen Family review where I will share my thoughts on two of the other sisters and their series.