Every bloody thread has been leading to this . . .

I’ve battled a lot of bad guys in my time, both as Gin Blanco and as the notorious assassin the Spider. But I’ve never faced off against anyone quite as powerful and deadly as the dastardly leader of the Circle secret society.

Just when I finally have a lead on how I can defeat the evil group once and for all, new information comes to light that throws me for a loop. Suddenly, everyone and everything I love is in imminent peril of being destroyed, and I’m racing against the clock to figure out a way to save my friends.

The stakes couldn’t be higher, and the danger has never been greater. Somehow, I need to weave one last strand in my web of death—and kill my enemies before they kill me . . . 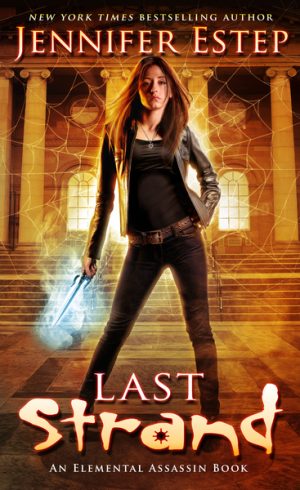 Finnegan Lane, my foster brother, made that pronouncement in an exceptionally bold, gleeful tone. A wide grin stretched across his tan, handsome face, and a conspiratorial gleam brightened his green eyes, further indicating his interest in committing a serious felony.

“But you work at a bank,” I pointed out. “Why would you ever want to rob one?”

“Plotting an elaborate heist. Liberating trays of diamonds, stacks of gold bars, and piles of cash from a supposedly impenetrable vault right out from under the noses of our enemies. Executing a complicated, convoluted plan that goes completely off the rails but somehow still works out at the very last second.” Finn’s grin widened, and he rubbed his hands together in anticipation. “C’mon, Gin. This is the stuff that dreams are made of.”

I snorted. “I think you need some different dreams. You know, ones that are a lot less dangerous and illegal.”

“And ruin all the fun? Absolutely not.” He winked at me. “Besides, we all know that Dangerous and Illegal is my middle name.”

“And here I thought it was Alexander,” I drawled.

Finn ignored my teasing and checked his reflection in the rearview mirror, making sure that his walnut-brown hair was still perfectly, artfully in place. Then he straightened his green tie and smoothed his silvery suit jacket, both of which were also still perfectly, artfully in place. Apparently, looking good was another key component of my foster brother’s bank-robbing fantasy.

Someone deliberately cleared his throat, and Finn and I both glanced over our shoulders at Owen Grayson, my significant other. With his blue-black hair, violet eyes, and tan skin, Owen was just as handsome as Finn was, albeit in a rougher, less polished way, especially given his slightly crooked nose and the thin white scar that slashed across his chin.

Still, my heart always skipped a beat at the sight of him, and my gaze roamed over the navy jacket that stretched across his broad shoulders before following the line of his gray tie down his chest. Mmm-mmm-mmm. Perhaps I’d been hanging around Finn too long, but few things appealed to me more than Owen Grayson in a snazzy suit. Or perhaps I just liked his buttoned-up look because I knew about all the hard, defined muscles that lay underneath the fine fabric, sort of like knowing what was hidden beneath the wrapping paper on a Christmas present. Well, unwrapping Owen out of one of his many suits was always a treat for me.

“Um, I hate to point out the obvious, Finn, but you’ve actually been in a bank robbery before,” Owen rumbled.

Finn kept his grin fixed on his face, but his jaw clenched, as though he were grinding his teeth to hold the happy expression in place.

Several months ago, Deirdre Shaw, Finn’s long-lost mother, had swanned back into Ashland, chock-full of fake apologies and hidden agendas. Supposedly, Deirdre had wanted to make up for lost time, but she’d really been plotting to rob First Trust, the bank where Finn worked. Thanks to me, Deirdre’s heist had gone sideways, but not before she had revealed her true, duplicitous nature and had brutally tortured her own son with her elemental Ice magic.

Finn’s longing to finally get to know his mother had been far more precious than any diamonds, gold bars, or cash in the First Trust vault, and Deirdre’s cold, cruel, calculated betrayal had utterly destroyed that longing—along with a good chunk of Finn’s heart. Perhaps even worse, he’d had to kill his mother to stop her from killing me, something that still filled my own heart with guilt and grief.

Owen’s gaze flicked back and forth between Finn and me. He grimaced, realizing that he’d hit about a dozen different nerves. “Sorry. I wasn’t thinking. I didn’t mean…” His deep voice trailed off, and he grimaced again. “Sorry.”

Finn waved his hand, indicating that all was forgiven, but his grin had vanished, and his eyes had dimmed. My heart squeezed tight at his obvious pain—pain that I was partially responsible for, even if Finn claimed otherwise.

Someone else deliberately cleared his throat, breaking the awkward silence. “I don’t know why we’re talking about robbing a bank. Technically, we have every right to be here. Well, Gin does.”

Silvio Sanchez, my personal assistant, spoke up from his position beside Owen in the backseat. Silvio was about twenty years older than us thirtysomethings, and his gray hair and eyes gleamed in the morning sunlight filtering in through the windows, as did his bronze skin. My assistant was also dressed in a suit, although his was a dark, subdued gray, compared to Finn’s lighter, brighter, silvery threads. Still, Silvio looked just as polished as my brother and my significant other did.

“After all, the account was left to Gin,” Silvio continued, pointing out facts the way he so often did. “So she has every right to access the funds. If she ever decides to get out of the car.”

He raised his eyebrows at me in a silent, chiding question. I sighed, faced forward, and looked out through the windshield again.

The four of us were sitting in Finn’s silver Aston Martin, which was parked on the third level of a garage down the street from the Bellum Bank. Normally, going to a bank would be no big deal, but the people flowing in and out of the doors were far more dangerous and devious than your usual bankers and customers.

That was the problem.

The Bellum Bank was no ordinary financial institution. Instead of being a place for regular folks to cash checks and apply for mortgages, the Bellum Bank catered to Ashland’s underworld. Even criminals needed somewhere to deposit their money, as well as store their other ill-gotten goods, and the Bellum Bank was a one-stop shop for shady financial transactions, money laundering, and more.

Well, technically, it wasn’t my account but rather one that had been left to me by Fletcher Lane, Finn’s dad and my foster father and assassin mentor. I had no idea how much money was actually in the account. All I knew was that Fletcher had wanted me to use the funds to destroy my uncle, Mason Mitchell—something that I was eager to do.

After months of investigating, I had finally discovered that my dear uncle Mason was the head of the Circle, a secret society that was responsible for much of the crime and corruption in Ashland, as well as so much misery, heartache, and pain in my own life.

Among his many, many crimes, Mason had tortured his own twin brother, my biological father, Tristan Mitchell, to death for daring to question his leadership of the Circle. Then, several years later, Mason had ordered Fire elemental Mab Monroe to murder my mother, Eira Snow, and my older sister, Annabella. Mab had tried to murder me too, along with my younger sister, Detective Bria Coolidge, although we’d both managed to escape the Fire elemental’s wrath.

A couple of weeks ago, Mason had finally crept out of the shadows he’d been hiding in for so long. My uncle had dropped all sorts of nasty familial bombshells on me—including the fact that Fletcher used to work for him. That revelation had done the most damage to my heart, and I was still struggling to make peace with all the horrible things my beloved mentor had done on Mason’s orders.

But Fletcher had eventually gotten out from under Mason’s thumb, and he’d stolen a good chunk of the Circle’s money—money that Mason desperately wanted back. Despite my uncle’s best efforts, I was the one who’d found Fletcher’s black ledger, which had been hidden away for years. And now, here I was, sitting outside the bank where the money was supposedly being kept.

Only one problem: I was too afraid to go inside and actually get said money.

I might be Gin Blanco, the assassin the Spider, the supposed queen of the Ashland underworld, but I’d been on so many wild-goose chases over the past few months, with clues that only led to more clues, that part of me didn’t want to go inside the bank and have to solve yet another mystery Fletcher had left from beyond his grave.

I couldn’t bear being disappointed again.

Jennifer is also the author of the Crown of Shards, Gargoyle Queen, Section 47, and other fantasy series. She has written more than 40 books, along with numerous novellas and stories.