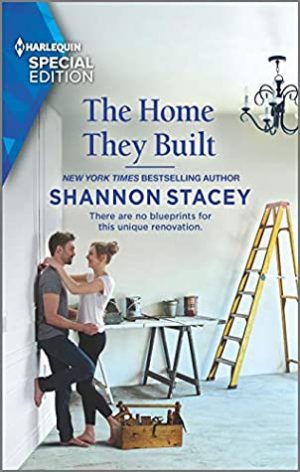 Finn’s grandmother, Tess, is known for her outrageous schemes, but this one takes the cake. She’s entered (and won) a contest to have her home renovated as part of the TV show called Relic Rehab. The problem: she told the show her home is an inn so that she would qualify, and now that the day of filming is here, she’s told her son, daughter-in-law, and grandson about the plot; too late for them to put a stop to it. Now they, along with the whole town, have to go along with Tess’s plans.

Finn is supposed to be the inn’s handyman (he doesn’t do much manual labor), and has to take off from work for two weeks. Anna is the host of Relic Rehab. She KNOWS this is all a scam, but went along with the application because she has her own reasons for being in Blackberry Bay. She’s got a secret…

The Home They Built is the third story in the Blackberry Bay series. It is set about eighteen months to two years after the previous book. While there are many familiar characters and great tie-ins to the first two books, The Home They Built can be read as a standalone romance.

Anna and Finn find an immediate and strong mutual attraction that sort of flummoxes both characters. They both are “distracted” by the other, but realize they can’t act on the feelings, even after they share a passionate kiss. Both are hiding secrets, plus Anna is only in town temporarily, so they try to avoid one another. Yet, soon enough they succumb to the attraction and sparks fly!

The reason Anna takes advantage of the show going to Blackberry Bay is a good one, and if you’ve read the second book, Their Christmas Baby Contract, you’ll have an idea of how she is tied to the community. This part of the story is thoughtful and adds something more to the small-town romance. Predictably, the weight of the lies causes things to fall apart, but watching Anna and Finn put it back together makes for a touching story.

In the end, I enjoyed my return to Blackberry Bay. The Home They Built is a cute, easy read that is predictable but entertaining and enjoyable.

Will their secrets stay hidden when the cameras start rolling?

There’s nothing Finn Weaver won’t do for his incorrigible grandmother, including pose as a live-in handyman for the TV reno show Relic Rehab. Host Anna Beckett knows good and well the Weaver house has never been a functioning inn, but taking the project got her to Blackberry Bay…the only place she’ll ever find answers about her own family. Keeping big secrets in a small town is enough of a challenge—can Finn and Anna’s romance survive the truth?