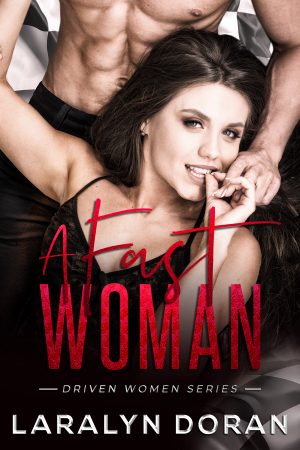 Me. Because that was supposed to be my car.

I needed to find Harper. Now.

I glanced at Grady. He sat forward, his elbow on his knee, his other hand cupped the back of his neck.

I needed to get out of here. I shot out of my foxhole and made it about five strides when a hand gently caught my elbow.

I stumbled and he had to grab my other arm to help me. Again. “Hey there…I never caught your name…”

I stiffened and turned to meet his eyes. “That’s because I never gave it to you.”

Oh, I know who the hell you are…
“Thank you for saving me from the face-plant, Mr. McBane,” I said, stepping back. “I’m afraid I’ve had enough of these shoes.” I distractedly searched for Harper.

His lips held back a smile as he glanced down, letting his gaze roam over my legs. “I will say they look amazing on you…except for the train you seem to be dragging behind you…”

My head flew down to my feet.

About six squares of toilet paper were caught on the back of my engine red Louboutin heels like a little bride walking down an aisle.

Marrying me off to permanent humiliation.

I kicked off the offending shoe and pulled off the toilet paper, throwing it back at the bathroom as if it would be sucked into a vortex.

In my haste to rid myself of the paper trail, I grasped onto God-man—Grady’s—bicep for balance. After replacing my shoe, I straightened, muttering a number of unsavory phrases I learned growing up inside garages full of men.

A low chuckle built up from Grady.

It wasn’t possible to become anymore embarrassed. I was as furious with the universe, and Grady was the universe’s proxy.

My hip was cocked out, I glared from underneath my heavily mascaraed eyelashes, and I’ll admit to a little head bobbing. “Am I funny to you?”

He placed his hand over this mouth, but it couldn’t hide the laughter in his eyes. His gorgeous, damnable eyes.

He was laughing at me.

My fists started to clench, and I was tempted to take him down the way Tommy and Gus taught me to take down a man twice my size.

“You’re seriously laughing at me. You are an asshole,” I said. “I should’ve known.”

He gently grabbed my elbow again. “No, no. Darling. I’m not laughing at you. Really.”

I swear his eyes glittered and I was questioning whether it was charming or condescending.

Wait. Who the hell cares?

I stared at his hand on my elbow and then landed a glare that had been known to stop lesser men.

“Okay, maybe a little.” He pinched his finger and thumb together. “But I’ve never seen a woman so indignant with a piece of toilet paper before.” He softened his tone, “And still manage to look so beautiful.”

I’ll admit…I may have melted… a bit.

Wait. He called me beautiful.

Not the point.
I reinforced my defenses. He’s a driver. He’s out for your ride.

“Thanks for the save, again. Nice to meet you,” I said, determined to get out of this hell. I added on as an afterthought as I walked away, “Still an asshole.”

“Wait, come on…I haven’t even met you, yet.” He stepped in front of me to cut off my path.

Cooper came back over, wedging himself between Grady and me. “Grady, man. We got to go.”

“Not until I get her name,” Grady said, not taking his amused smile off me. “In case you need my white-knight-services again…”

“Only my friends, who aren’t a******s, get my name.” I began walking backwards to an approaching Harper.

“I can be your friend.” His eyes drew me in, and his smile was more teasing than arrogant.

“I have enough friends.” I turned, determined to get the hell out of there. I didn’t want to deal with this right now.

He raised his voice, “So that’s it? I think it will break my heart if you leave without telling me your name. What if I never see you again?”

Harper’s pace slowed as she recognized Grady and her eyes widened as she took in my expression. I held up my hand to silence her before turning one last time to Grady McBane, gifting him with what I hoped wasn’t the smile of a serial killer. “Don’t worry. We’ll see each other real soon.”

I grabbed Harper and pushed her through the maze of chairs and people. As we walked out the front door and onto the street, she tried to get me to stop, but my blood was pumping and there was no way I was able to stand still. There was a seismic shift in my perfectly laid out road and I never saw him coming.

“Was that Grady McBane? What’s he doing in town?”

With his teasing presence gone and the connection between us cut, the realization settled in and fury stampeded through me. “He’s here for my job.”

Strap in for a hell of a ride.
One contract—two drivers.
Neither saw the other invade their blind spot,
Until the competition—and their chemistry—
threatened to ruin both of their racing careers.

CJ Lomax
People call me a fast woman—not because I slept around—because I broke men’s hearts on the racetrack. While climbing stock car’s highest level of racing, I learned three truths:
Adrenaline was my drug of choice,
Wearing a pair of heels was a form of torture,
And I didn’t have time for distractions—especially from men.
I had one goal—A Cup Series contract—and it was within my reach. Until Grady McBane cut me off—sending me, and my dreams, into a tailspin.
His damn smile, his charm, his talent…his touch.
My hormones overrode my focus.

Grady McBane
The moment the beautiful, spitfire CJ Lomax tripped into my arms, it felt right.
Then Karma stepped in and laughed—Redeeming my reputation meant ruining her dream.
Even though I needed the contract to salvage my career.
I found myself chasing her instead of racing her. Her focus, her sass, her grit…her passion. I wanted it—I wanted her.

How do we cross the finish line without wrecking each other’s hearts?

A Fast Woman is currently offered for sale and in Kindle Unlimited:
Amazon: https://amzn.to/30vzYLt

Laralyn Doran is a multi-award-winning author and member of several romance writer associations. She lives in Maryland with her family, including her three spoiled dogs. She’s a special needs mom and an advocate of autism & dyslexia education.

She’s an audiobook addict, and posts about being a writer, strong women doing cool things, wine and her dogs. Find her at:

Subscribe to her newsletter for Boss Lady release events: https://laralyndoran.com/