Born of the Forbidden 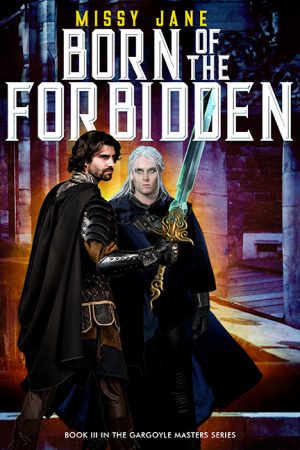 Craig gave a short nod. “It’s good you came to see the boy. We’re a family here. He needs to hear your voice, see your face.”

Steinn crossed his arms. “I don’t think that’s likely when I can’t get close enough to hold him.”

They looked to the small crowd surrounding Phaidra as she discreetly nursed Neleus.

Craig chuckled. “I see your dilemma. No matter, Ourania is sure to want some attention.”

Steinn looked around the spacious den for Orestes and Astrid’s daughter. “Where is she?”

“Library, most likely. She’s as obsessed with books as her mother.”

“She can’t be reading already?”

Craig’s brows went up. “I forgot, you haven’t been around much. She’s doing all sorts of things she shouldn’t at such a young age. The wizards visit her weekly to measure her progress. There is a bond between her and Orestes, much like that between all of us. The girl almost seems to become more gargoyle every day.”

Steinn headed to the library with Craig on his heels. Their niece had been the first born of any of the Gargoyle Masters and was still a puzzle to both them and the wizards. She could turn to stone at will like her father, though without the wings, but resembled her human mother in every other way. She was highly intelligent and grew at a faster pace than any human child. So, when Steinn entered the library and saw a small girl who appeared to be five years old sitting with a book in her lap, he had to blink twice before greeting his not-quite-two-year-old niece.

“Ah, there is my lovely princess,” he said.

She smiled as she set the book down on the bench beside her, then leapt to her feet and ran over. “Unca Steinn! Unca Craig! I’m so happy to see you.”

They each took a turn lifting her into a hug which made her squeal in girlish giggles. It did Steinn’s heart good to hear those sounds, and he realized he had been away far too long.

“What are you reading?” he asked.

“A History of Lenara. Did you know the living wall was made by the wizards?”

“Yes,” Craig replied. “We’ve been educated on the history of Lenara as well, and the many feats of The Twenty.”

“Can you believe there’s now a woman wizard?”

The awe on her cherubic face caused a twinge in Steinn’s chest. “Princess, that just shows females can do anything the males can do.”

“That’s what daddy says too, but mum just smiles.”

That didn’t surprise Steinn, considering the state Astrid had been in when Orestes had first noticed her as a servant at their table. The image of her emaciated frame in a dirty, torn dress still made him shudder.

“Your mother is far stronger than she realizes,” Craig said with pride. “Just look at how she rules over your father.”

Ourania giggled. “Yes, but Daddy lets her. I know you can’t be bested by anyone in the whole kingdom. You’re all so strong and brave.”

Steinn took her hand and led her back to the bench. “Brave we may be, but you’ll soon be smarter than all of us combined. Show me your favorite part of the book.”

Long moments later, she was still speaking animatedly about the wonders of Lenara. Craig had slipped away at some point, but Steinn didn’t mind. The lilt of Ourania’s young voice soothed him, and he basked in her open, carefree glances. There was no judgment here, no worries, no unanswerable questions in that look. If only the rest of his family looked at him thus, he wouldn’t feel the need to spend so much time away.

“Why are you sad, Unca Steinn?”

That question shook him out of his musings. “Why am I sad?” He looked into her large eyes and knew he couldn’t lie. “I have a dear friend that I can no longer talk to, and I miss him.”

Her little lower lip pouted, and he inwardly cursed himself. “No, don’t cry for me, princess. I’ll be fine.”

He blew out a breath, almost a laugh. “No, he is still very much alive. I simply can’t speak to him anymore.”

“Because he is probably very angry with me.”

“I…” Did he? “No, I’m not sure. And though I’m usually brave, even in the face of the ugliest monsters, I’m afraid to face my friend and see his anger and pain.”

She nestled her small palm against his much larger, rougher hand. “If he’s a good friend, Unca, then he’ll forgive you. Maybe you should just try instead of staying sad. It makes Daddy and my other uncas sad too.”

Before she could ask any other questions, Astrid entered the library, her son on one hip. “Steinn. Is that really you?”

He stood to give her a hug. His nine-month-old nephew Ares was fast asleep against her shoulder, but he took the burden into his arms.

“Oof. What are you feeding this one? Bowls of stones?”

Ourania giggled so hard she nearly toppled off the bench. Astrid just smiled. “I suspect Ares is going to be as large as his father, no matter what he eats.”

The amusement faded from her face as she looked him over. She had to stand up on her toes to brush the scraggly hair from his eyes. “And why are you looking so unkept these days, Steinn? Everyone worries over you so. Did someone here in the castle anger you? Is that why you stay away?”

Her concern caused the ache in his chest to return, but he couldn’t bring himself to give her the truth. Instead, he forced a smile. “Of course not, dear sister. I’m out there doing my duty tenfold so the others can be home more. We must find the Varish, and soon.”

The look in her eyes told him she wasn’t fooled. But after another brush of her fingers, her smile returned. She turned away. “We thank you for taking on the extra duties. I do love having Orestes home in our bed.”

“Daddy reads me a story every night,” Ourania added.

He smiled down at her and hugged his nephew a bit tighter. “Then my time away is worth it.” A glance showed Astrid’s frown. “And I’m sure it won’t be much longer before we find them. You’ll see. Soon I’ll be back home as often as I was before.”

Neither female looked as if they believed him, but the babe in his arms stirred and saved him from further scrutiny. He handed the bundle back to Astrid, kissed both her and Ourania on their cheeks, and returned to his unending search of the enemy.

Some desires are too strong to be denied.

Master Steinn is loyal to his brothers, his King, and his people, but his desire for another man is leading him into unchartered territory. As a Master Gargoyle he protects the realm, but did he inadvertently bring on a threat from the Varish with his taboo encounter? Despite being made of stone, the strength of his feelings for Zephyr may be more than he can fight.

Brónach’s gift of foretelling is often a curse. The jumbled images she dreams aren’t usually helpful, but this time the danger is clear. Relaying the message is the easy part, the challenge comes in ridding herself of the one gargoyle who stops her heart. Adalstan has no clue she’s desired him for years. Now she finally has his attention at the worst possible time. Will he hate her once the full foretelling is revealed?

Twelve brothers turn to stone to protect the human realm, but they can’t protect their hearts once they find the mates who call to their souls. As they battle the unexpected feelings within, a battle wages in their city, a prophecy comes to light, and the fate of the entire continent is at stake.

Ms. Missy Jane is the alter ego of a Texas mother of four who has been married to the same wonderful man for over twenty years. Missy spends most of her time lost in worlds of her own making, alternately loving and hating such creatures as vampires, shape-shifters and gargoyles (to name a few).  When not writing, she spends her time reading, taking photos of her four wonderful children and training her husband to believe she’s always right.