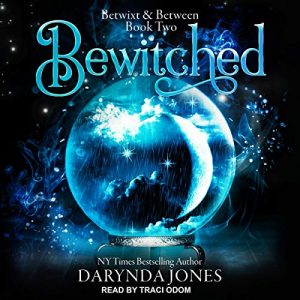 Bewitched opens with a crazy twist, and it takes our reluctant heroine, Defiance, aka Daphne, some time to adjust. At the conclusion of Betwixt, Daphne pulled her grandmother Ruthie from the “other side,” making her corporal. In addition, her ghostly grandfather now covers the house in roses, able to manifest himself into the beautiful vines to protect Daphne.

While BFF Annette is excited to start their magic-based detective business together, Daphne makes plans to run away from the craziness of her new life. However, when Daphne meets an adorable young boy ghost and accidentally releases a malevolent spirit inside her home, she has to figure out a way to use her powers to help her family and friends.

Bewitched is a wonderful follow up to Betwixt and everything I was hoping for in the sophomore title. Now that Ms. Jones has established the characters and world, she is able to really dive into Daphne’s story. We see Daphne slowly gain confidence and embrace her long-forgotten powers. We learn more about her magical roots through her relationship with Ruthie and Percy. We watch her try to deny her growing feelings for Roane, and how he won’t let her. I adore seeing how each of her relationships intensifies and grows with every kernel of knowledge or small action. The multiple storylines in Bewitched work well together and I was engrossed from the very beginning.

One thing of note for fans of Ms. Jones’ crazy popular Charley Davidson series, Bewitched brings familiarity. From the chapter-opening memes to the silly jokes and easy banter, Daphne and her story feel and sound a lot like Charley and her world. Even Ms. Odom’s performance is reminiscent of Ms. King in how she portrays the main character and best friend sidekick. With that said, Deph’s story is complete different than that of Charley.

Narration: Ms. Odom gives the perfect performance for the first person POV, 40-something Defiance. She exudes a worn-down but calm woman who is taking one day at a time. She also does a wonderful job with Annette, adjusting her voice as she undergoes a few bumps. I found her array of female characters unique and fitting. Both females and males are adjusted appropriately for age. Overall, her males are deeper, but soft and whispery sounding rather than masculine. However, with that said, I’m either used to her male voices, especially for Roane, or they’ve changed a bit from the first book, because they didn’t annoy me as much as they did the first time around.

In the end, I loved going alongside Daphne as she learns more about her powers and family. Bewitched is filled with silliness and sexiness, buddy fun and family love. I cannot wait to find out what adventure is next for Defiance!

My Ratings
Story: A-
Narration: B

Forty-something Defiance Dayne only recently discovered she comes from a long line of powerful witches. Added to that was the teensy, infinitesimal fact that she is what’s called a charmling. One of three on the entire planet. And there are other witches who will stop at nothing to steal her immense power, which would basically involve her unfortunate and untimely death.

No one told her life after forty would mean having to learn new lifeskills—such as how to dodge supernatural assassins while casting from a moving vehicle—or that the sexiest man alive would be living in her basement.

Whoever said life begins at forty was clearly a master of the underappreciated and oft maligned understatement.