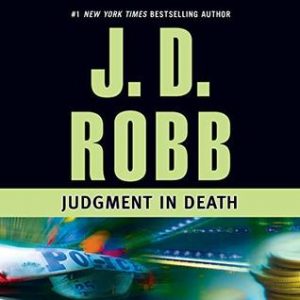 Judgement in Death has Lieutenant Eve Dallas working a murder case where cops are getting killed. The first body is found in a classy strip joint owned by no other than Roarke (he really is richer than god; he owns all the property it seems). But unlike other cases, Roarke is not on the list of suspects.

Eve works the case and clues point to another cop doing the killing. All the cops but one are dirty so it appears that killer might bee a “good” cop who is offended by dirty cops and is killing for vengeance.

Roarke and Eve are still navigating marriage and run into some bumpy waters when two people involved in the case muddies the their life and work balances. Of course Roarke’s answer is to take Eve like the alpha he is, and she gives just as good as he does. There’s a funny moment where Eve is talking with Dr. Mira about a fight that led to sex.

“Nonetheless. Both of you reacted as natural for you, engaged in a bout of rough, sweaty sex that no doubt satisfied you.”

“You’d have thought so, but we hadn’t even cooled off when he picked me up off the floor and carried me into bed and did it all over again.”

Mira stared, rather blankly. “Does he have a particular diet? Vitamins?”

Listening to how Roarke and Eve’s fight turn to sex got Dr. Mira all worked up and thinking that her husband would benefit from it and then wanted to know I’m sure what her husband needed to do in order to have the stamina of Roarke. LOL

Judgement in Death was another enjoyable case in the In Death series.  Susan Ericksen continues to deliver an outstanding performance with the characters and their emotions. I couldn’t imagine anyone else bring Eve Dallas to life. She also does a bang up job with Roarke and the other secondary characters.

‘She stood in Purgatory and studied death. The blood and the gore of it, the ferocity of its glee. It had come to this place with the wilful temper of a child, full of heat and passion and careless brutality.’

In an uptown strip joint a cop is found bludgeoned to death. The weapon’s a baseball bat. The motive is a mystery. It’s a case of serious overkill that pushes Eve Dallas straight into overdrive. Her investigation uncovers a private club that’s more than a hot spot. Purgatory’s a last chance for atonement where everyone is judged. Where your ultimate fate depends on your most intimate sins. And where one cop’s hidden secrets are about to plunge innocent souls into vice-ridden damnation…