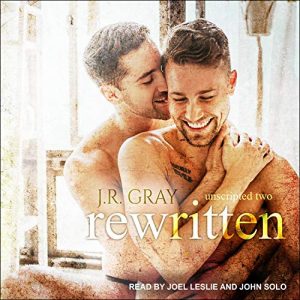 Quellcrist King and Hale Evans had to fight more than a few battles in order to begin their new life together—Quell’s ex, their disparate levels of celebrity, the complications of being out in Hollywood… All of which were further compounded by Quell’s depression. Now, despite the pressures that fame can put on any relationship, Quell and Hale are committed to trying to make it work. After all, they already have everything that a chance at real happiness ought to have: trust, hope, and true love. But, what if that still isn’t enough?

Rewritten, the second story in the Unscripted series by J.R. Gray, picks up around the same time the previous one (also titled Unscripted) ended. Not having read either book prior to listening to the audio, I had to rely solely on the narration, which, in this case, turned out well. While listeners witness the events through Hale and Quell, it felt as if the true main character of Rewritten was actually Quell’s depression. Regardless of who’s speaking or where they are, or what’s happening, it’s always there—as it is for those in the real world who live with it every day.

Given the ever-increasing difficulties both men face, and the realization that levity is in short supply throughout the narrative, I can see how some might not want or be able to participate in this part of their journey. And that’s okay. Rewritten isn’t an easy story. Still, Quell and Hale do have a lot going for them. They have good friends and access to support. Everyone close to them have committed to the battle and are fighting for their happily ever after, including ensuring that Quell’s mental health is a priority for the studio. Though it doesn’t preclude him from making mistakes, Hale has experience with navigating his brother’s depression. Mostly, they love each other enough to accept the uncertainty that a life together will bring, and are determined to never give up.

I was very happy that both narrators reprised their original roles for this performance of Rewritten. With all the difficulties the Hale and Quell experience, the familiarity these actors brought was something of a comfort. As much as I welcomed Joel Leslie’s approach to Hale and the humor and tenacity he adds to the story as a whole, it was Quell’s tremulous need and whisper-soft longing as enacted by John Solo that kept me riveted until the end. Regardless, I can’t imagine any other voices for these characters at this point.

Although I can confirm that the third title in the series stands on its own without much trouble, Rewritten really needs to be read after Unscripted in order to fully comprehend the pressure Hale and Quell are under throughout the narrative. Depression will never be an easy thing. As we see through both characters’ perspectives, it is gossamer and elusive, and unbearably destructive. Fortunately for Quellcrist and Hale, hope is no easier to vanquish in Rewritten, and that second chance felt as certain and warm as I might have wished for.

Quellcrist wasn’t new to fame or the effect it had on a relationship. He’d been married in the spotlight for as long as he’d been famous. But that was before Hale. He knew it was going to test him, but even he hadn’t known the toll that months apart would take on his fledgling relationship.

Long days of shooting, different time zones, calls every day dwindled to days without calls, and rumors were all over the rags. Through it all Quell had to battle his own worst enemy, but he didn’t know how to win against something inside him. Depression ate him whole, and pain took over.

There was so much more at stake than losing his boyfriend; he was losing his best friend. His lifeline, the love of his life. Was there any way to come back from the damage done?