Audiobook review: To Kill the Dead by C.S. Wilde 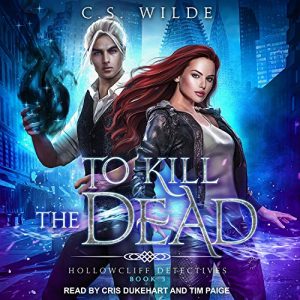 Picking up some time after the conclusion of the previous book, To Kill the Dead opens with an exciting chase scene in which Mera and Bast confront a living dead (aka zombie). We find out that Mera and Bast have become the dream team detectives, solving all sorts of cases. When the opportunity to go back to her home district presents itself, Mera (and Bast) are all in, which is how the pair ends up chasing down the living dead. The pair quickly learns that there is a rogue necromancer loose, and its goal is to create chaos while making Mera suffer.

Although I enjoyed the first two titles in the Hollowcliff Detectives urban fantasy series, I had some issues with the quality of storytelling. I feel that To Kill the Dead represents a huge improvement, with a strong plotline, engaging character interactions, and a solid love story. Although the story is shared via both Bast and Mera’s POV (a feature I appreciate), the story feels like it belongs more to Mera since the overall, mysterious bad guy is tied to her life under the sea. This time around Mera (and Bast) still makes a couple bad choices, but overall, her character has shown growth over the course of the series. She’s stronger both emotionally and with paranormal abilities, and she’s come to terms with her relationship with her foster mom/police caption, Ruth. Additionally, she has time to evaluate her feelings for former partner Julian, and current partner Bast.

The mysterious necromancer seems to have a personal vendetta with Mera, and as the story progresses, it appears it also has link to the unofficial Poseidon case. Working separately, Mera and Bast piece together the facts, which come with a few a shocking revelations. I enjoyed seeing Bast work with his once estranged brothers, the trio bringing some comic relief and bromance to the tale.

Narration:  The story is shared via the third person POVs of Mera and Bast. Ms. Dukehart does a good job representing Mera, capturing her drive and emotions. I appreciate the way the narrator separates the dual natures of Mera: her human and siren. Ms. Dukehart changes tone and voice for dialogue, making it appropriately deeper for males. I didn’t notice a huge difference between characters of the same gender, but enough for distinction and to keep it interesting. Mr. Paige performs the sections shared from Bast’s POV. His tone, speed, and cadence are fitting. However, his performance is very dramatic… he infuses a lot of emotion into the characters, but it’s a bit over the top. It makes Bast almost appear to be whiny, which he isn’t. Additionally, I am not a fan of his voices for female characters. They are lighter and more feminine (or childish), but almost to the point of being shrill.

In the end, I enjoyed To Kill the Dead. The tale is filled with solid action and a strong plot. The standalone mystery is interesting and feeds into a larger story arc. It feels like things are coming to a head, and I look forward to listening to the next title.

My Ratings
Story: B
Narration:
Dukehart: B
Paige: C

All terrible things come in two.

Mera never imagined she would have to face a necromancer without Bast, her fae partner, but the Captain decided to separate them on a whim – or so she thinks.

Running against the clock to avoid an outbreak that could destroy the human borough, Mera is forced to work with Julian Smith, the man she used to love before the Night Prince came waltzing in her life.

Not good. Not good at all.

Meanwhile, Bast chases Poseidon with the help of his brothers, knowing it’s the only way to ensure Mera’s safety. He’ll do anything to save her, even if it means his doom.

The dead are rising. And Poseidon is coming.