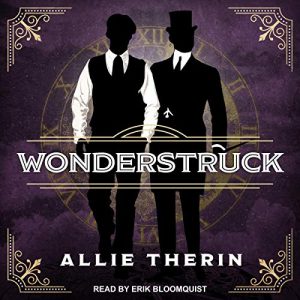 Kicking off only a few weeks after the conclusion of Starcrossed, Wonderstruck opens with Arthur, Jade, and Zhang following leads on ways to destroy the magical pomander. Arthur misses Rory terribly and is very worried about his safety now that the Baron knows he’s alive. Meanwhile, Rory is back home with Sasha and Pavol, unsuccessfully practicing with the Tempest Ring. Mrs. Brodigan, Rory’s adopted aunt, tells him that she’s going to marry, move to Boston, and close the shop.

Wonderstruck is the final story in Ms. Therin’s Magic in Manhattan wonderful genre-crossing series, and the books should be read in order. Arthur, Rory, Jade, and Zhang are trying to ensure the safety of non-magical people through destroying the pomander relic while escaping the notice of the Baron, who wants the relic and Rory for himself. In order to learn more and find a permanent way to destroy the relic, the gang must travel to Europe and trust former friends-turned-enemies Gwen and Ellis. This puts Rory closer to the Baron, as well as Arthur’s ex, Lord Fine.

Ms. Therin packs this final story with plenty of action and adventure. There are several close calls and a couple amazing twists. Starting with a close call for Rory near home and culminating while the gang is in France and confronting the Baron, the story is suspenseful, keeping me on edge of my preverbal seat. I love how the final scenes play out, bringing all of the pieces together and revealing the bigger picture.

While an exciting adventure, Wonderstruck (and the preceding books) is a love story at the core. Rory and Arthur have always had an imbalance, whether it is their socio-economic classes, magical talent, or age, the pair never fits “just right.” However, now that they’ve spent time together and are learning to be in a relationship, Arthur and Rory begin to equalize. Arthur realizes that protecting Rory means allowing him to make his own choices and doesn’t mean keeping things from him. Meanwhile, Rory learns to let Arthur into his heart, trusting him to always be there. They have their disagreements, but they learn to connect and trust. While there are times that Rory’s immaturity leads to childish behavior, it’s how he learns to deal with the feelings that shows true growth.

Narration: The story is wonderfully performed by Erik Bloomquist, alternating between the third person POVs of Arthur and Rory. The narrator is a neutral male, with dialogue voices adjusted for gender, age, and social standing. Arthur’s voice cultured and smooth, fitting of the well-educated and well-traveled man. Rory is younger, more tentative but also prone to emotional outbursts. The characters are each unique, and I enjoy the wide variety of accents, all very fitting for the character and setting.

Wonderstruck is a wonderful finale to a fantastic trilogy. The Magic in Manhattan series, with its historic setting and interesting mythology, has been a delight to listen to, and I’m so excited that the author is penning a spinoff series.

Arthur Kenzie is on a mission: to destroy the powerful supernatural relic that threatens Manhattan—and all the nonmagical minds in the world. So far his search has been fruitless. All it has done is keep him from the man he loves. But he’ll do anything to keep Rory safe and free, even if that means leaving him behind.

Psychometric Rory Brodigan knows his uncontrolled magic is a liability, but he’s determined to gain power over it. He can take care of himself—and maybe even Arthur, too, if Arthur will let him. An auction at the Paris world’s fair offers the perfect opportunity to destroy the relic, if a group of power-hungry supernaturals don’t destroy Rory and Arthur first.

As the magical world converges on Paris, Arthur and Rory have to decide who they can trust. Guessing wrong could spell destruction for their bond—and for the world as they know it.