The Sorceress Queen and the Pirate Rogue 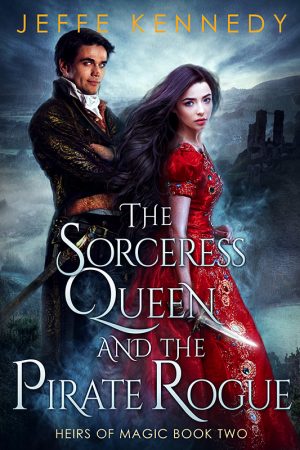 He didn’t move, listening with alert interest. Thoughtfully picking up one of the daggers lying on the seat beside him, he spun it between his fingers. “I know this about you, and I feel compelled to point out that I’ve always been careful about protecting you from being touched.”

That was true. For all of Jak’s carefree ways, he looked out for her, always careful not to touch her skin, guarding her in the press of crowds so the unwitting didn’t distress her.

“But you were also touching me just now,” he pointed out in a low voice.

His lips quirked with amusement. “How is healing-touching different than other touching?” He floated the word “other” with a mental image of very specific touching.

She nearly buried her face in her hands—would have, if it wouldn’t give away just how much he affected her. “It just is. I can’t explain it.”

“You don’t understand,” she ground out, clenching her fists in frustration.

“No, Stella,” he replied in the same tone, “I don’t. That’s why I’m asking the question. This is how people who can’t read minds discover stuff about each other. I can’t understand you unless you explain.”

“I never asked you to understand me,” she fired back.

“No. You’ve never asked me for a Danu-blessed thing, have you? Stop treating me like a child who can’t possibly comprehend grown-up things. I’m a man now.”

“I know you are!” She was more excruciatingly aware of that truth than ever in her life.

“Then throw me a bone here. What’s the deal with you?”

She wished she knew. Feeling cold now that the heat of anger and embarrassment had fled, she drew up her knees and curled in the corner of the seat. Taking up her thick cloak that she’d left behind in the carriage when she shifted, she pulled it around her and extracted her fur-lined gloves from the interior pockets, drawing them over her chilled fingers. Jak wore his padded leather jacket over the thin shirt, but surely he couldn’t be comfortable bare-legged like that. “Aren’t you cold?”

He tipped his chin at his lap. “The cold helps. And don’t try to dodge the question.”

“I don’t actually know what my ‘deal’ is,” she told him steadily. “I’ve learned so much about sorcery from Aunt Andi—for which I’m so grateful—but she’s not an empath like me. There aren’t any empaths like me, anywhere, maybe ever.”

He arched a brow. “Never, in all of history?”

She shrugged, irritated with it all. “Believe me, Dafne has looked.”

“Well, if Dafne can’t find the information, it’s not out there to be found.”

“True.” She smiled back, enjoying the shared amusement, before she sobered again. “I’m better than I used to be, not always so impacted by it. Shielding helps.”

“To wall people out.”

He made it sound so punishing, like she already lived inside that stone tower, shunning human company. Though, she had to admit, there were certainly times—especially when she felt overwhelmed with people—that retreating to an isolated tower sounded like an exquisite relief.

Book Two in the adult Fantasy Romance adventure series from award-winning, bestselling author Jeffe Kennedy. Follows the prequel novella, The Long Night of the Crystalline Moon, in the Under a Winter Sky romantic fantasy holiday anthology and Book One of Heirs of Magic, The Golden Gryphon and the Bear Prince.

Stella has always been one to count her blessings. Empath, sorceress, shapeshifter, and healer, she’s grateful for the gifts the goddess of shadows has bestowed upon her. Yes, she’s sensitive to emotions and can’t bear to be in large crowds for long. And yes, that means she’ll never be able to take a lover as she’s unable to withstand physical contact with anyone but her twin brother. Certainly now that he’s found his true love, she feels more alone than ever. None of it haunts her, however, like the vision of the lonely tower where her life path ends.

Jakral Konyngrr is a man of simple tastes: good whiskey, some coin in his pocket, and a fine blade in his hand. Though he’s no prince, not a shapeshifter, and not blessed with any magic, he’s happy in his skin. And yet he seems doomed to live the life of a hero from a tragic ballad, because the only woman he’s ever wanted barely knows he’s alive. As much as Jak longs for Stella, he’s resigned himself to being forever in the background. At least he can guard her back.

A Quest to Stop a Monster

But now Jak and Stella have been thrown together—along with a mismatched group of shifters, warriors, and sorceress friends—chasing and attempting to avert magic rifts that release monsters into their world. Worse, the strange intelligence behind the bizarre and deadly attacks seems to have developed a fascination for Stella. Battling for their lives and the good of the realm, they must fight—and perhaps love—together to alter the course of the future before it’s too late.